Criminals Using Abandoned Air Force Base In Edo As Hideout 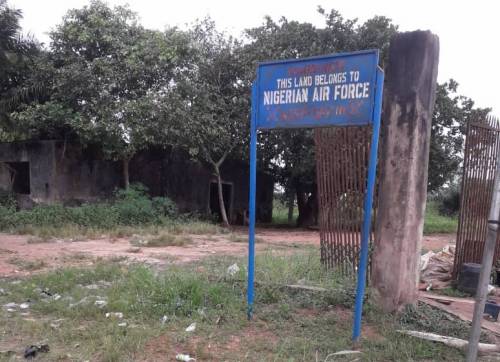 There are reports that an uncompleted Nigerian Air Force Base in Benin, Edo State, has been converted to kidnappers’ den after years of abandonment by the authorities.

Residents of the host community in Egor Local Government Area are now lamenting the abandonment of the building and how kidnappers and robbers tormenting the area use the place as hideout.

The Enogie of Egor Dukedom, HRH Tony Aigberowman ll, said letters had been written to the Nigerian military on the issue but nothing has been done.

“The Nigerian Air Force came and we accommodated them by giving them a big hectare of our reservoir land to them to establish Air Force base.

“When we discovered what the place has been turned into, we wrote the military base to come and renovate or remove their structure so we can make use of our lands in a way that these people perpetrating these acts will be ejected.

“They promised to come back but up till now we have not heard anything from them and the place it is still left abandoned.

“Our lives are no longer secure because of the bandits that have taken over the place.

“We are raising this alarm to save the lives of our people from looming danger in the community,” Prince Austine Orhue Ogiegor said while speaking for the king. Another resident of Egor community, who does not want to be named, stated that the neglect of the building poses a great risk for the people.

He also urged the Air Force to take a clear position on whether to continue the development of the building or allow the people to reclaim their land.

“The entire land belongs to the Royal family of Ogiegor. For over 30 years now, the place has been there fallow and forest has taken over the land “For couple of years now, the building has become an avenue for kidnappers, armed robbers, drug dealers and people who do different criminal acts.

“We recently saw that there is an illegal refinery at the back of the land and some government officials are collecting money from these bunkerers.

“The Air Force should let us know if they are no more interested in the land because our minds are not at rest and very soon, if action is not taken, this place will become a killing zone,” the resident said.