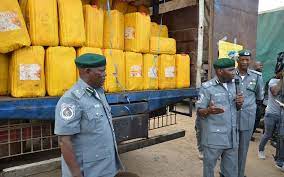 The Seme Area Command of the Nigeria Customs Service, NCS, has sustained surveillance and offensive patrol along the creeks and beaches within Badagry and its environs leading to the interception of one thousand, one hundred and thirteen (1,113) Jerry cans of PMS in (30) litres each, equivalent to thirty-three thousand, three hundred and ninety (33,390) litres during a routine patrol in beaches along the Badagry waterways.

Customs Public Relations Officer, Seme Command, SC Hussainii Abdullahi who revealed this in a statement said the seizure with a Duty Paid Value DPV of eight million, eight hundred and eight thousand, two hundred and eighty (N8,808,280.00) only was made in the late hours of Wednesday 8 December 2022.

He quoted the Customs Area Controller, Comptroller Bello Jibo as saying that, with this latest seizure, the Command has so far intercepted a total of thirty-one thousand (31,000) jerry cans of PMS in 30 litres each, equivalent to nine hundred and thirty thousand, one hundred and forty (930, 140) litres, about twenty (28) tanker loads of thirty-three thousand (33,000) litres each from January to date.

The Comptroller further stated that the giant feat achieved by the Command is unprecedented and the first of its kind in the history of the Command.

He reiterates the commitment of his officers to continue making smuggling unattractive while noting that the Command will not succumb to cheap blackmail paddled by economic saboteurs who believe that the only way to succeed in carrying out their nefarious activities, is by spreading falsehood on the Command.

He affirmed that the Command remains committed to fighting all forms of illegal and unlawful businesses to a standstill at our borders.