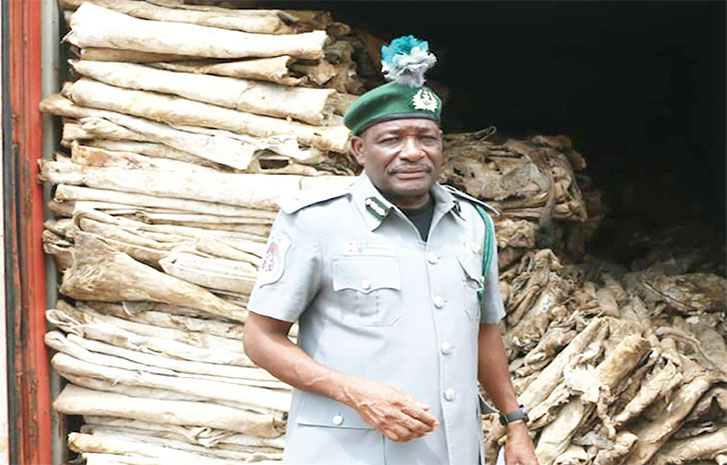 Controller of the unit, Aliyu Mohammed, at a media briefing said the animal skin were discovered at a location where they were being dried for export .

According to Mohammed the actual area of seizure will not be disclosed not to jeopardise ongoing investigations to under other seizures and arrest suspects connected with it.

The Controller further described it as an item under export prohibition aimed at preventing the animals from extinction.

FOU A Bossman said the whole seizures showed to journalists including vehicles and drugs are worth N16,082,092,706

The drugs, according to him, were intercepted on the road from a border area in Ogun State.

He reiterated that codeine drugs are prohibited from being sold across the counter due to incessant abuses and smuggling it into the country will endanger lives of citizens.

”We didn’t see the meat and it is possible they are being sold out to people as beef. As customs Officers, we are going beyond duty collection to protect lives of people.

”This seizure is part of our effort to prevent the mass killing of donkeys and discourage people from seeing it as a business opportunity.

“We also made seizures of codeine that is prohibited but was concealed with pain relief drugs without NAFDAC approved number valued at N101.6m.

”Within one hour, our officers seized 13 vehicles last week. Now we have a total of 29 exotic cars including a 2019 Land Cruiser. Total duty paid value for the seized vehicles is N712,172,706.

Mohammed added that the unit will intensify it’s onslaught against smuggling to suppress it for the protection of the economy and prevention of danger to lives.