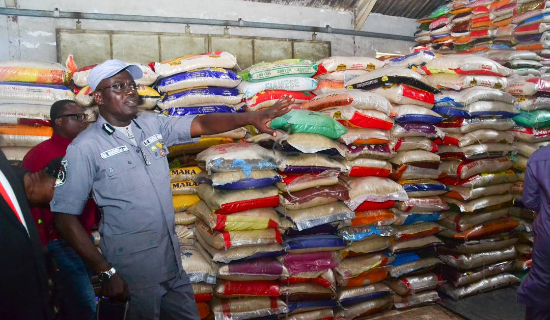 The Ogun 1 Area Command of the Nigeria Customs Service (NCS) has generated a revenue to the tune of N58.6 million between February and December 2022.

The Area Controller Bamidele Makinde, said the amount was generated from import duty, and auction sales of perishable and highly combustible goods such as Premium Motor Spirit (PMS) otherwise known as petrol.

Bamidele stressed that the Command conducts its anti-smuggling activities through the strategic deployment of personnel to man all approved border stations, surveillance, and patrol duties.

“In the wake of anti-smuggling operations conducted in the period under review in different parts of Ogun State, including the creeks, border lines, approved and unapproved routes, the Command recorded a total number of 842 seizures. This includes 44,933 bags of smuggled foreign parboiled rice of 50kg each, an equivalence of 73 trailer loads.” He confirmed.

Some of the seizures are 99 Units of Used Vehicles (Means of conveyance), 8 Units including one the year 2020 Wrangler Jeep, 6 units of used Trucks as means of conveyance, 31 units of Compressors, 16,224 kegs of Premium Motor Spirit (PMS), 19 units of Motorcycle (Means of Conveyance), 517 bales and 219 sacks of Secondhand clothing, 3,629 pieces of used tyres and 4700 bags of cement.

All the listed seizures above have a duty paid value of four N4.8 billion.

“It is important to note at this juncture that activities embarked upon by the Command are patriotic-driven in the interest of economic development and national security. Nigeria Customs Service operatives will continue to carry out their legitimate duties as prescribed by law. ” Bamidele Makinde noted.

The Ogun 1 Customs Area Boss, appreciated the continuous support of the Comptroller General of Customs, Col. Hameed Ibrahim Ali (rtd), and his Management Team as well as his gallant officers and men. “It is my pleasure to also appreciate our critical stakeholders such as the traditional rulers, community leaders, and other security agencies who are showing concern and are collaborating with the Service for their continuous support. May I also thank and appreciate the press for being objective in their news report.” He concluded.