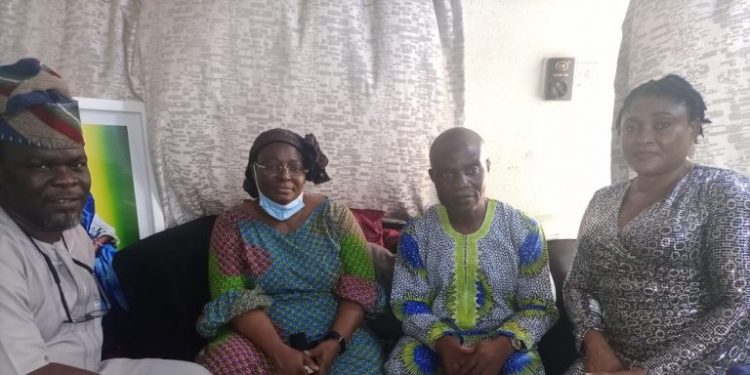 The leadership of the Nigeria Union of Journalists (NUJ), Lagos Council, on Friday, paid a condolence visit to the family of late Sadiq Daba, a veteran broadcaster and a movie star.

The Lagos NUJ Executive members, led by the Chairman, Mr Adeleye Ajayi, commiserated with the entire family of the late ace broadcaster, describing his demise as a great loss.

“We have lost a star, a father and a friend,” he said.

Ajayi said that he had been watching the late Daba on television as far back as the 70s when he was in secondary school.

“We have lost a man of repute, bunch of talent, and an expert in the film industry,” Adeleye said.

The NUJ chairman said that the Federal Government needed to immortalise the broadcaster as he was a national figure and a man of many parts.

Ajayi also proposed to the immediate family of the deceased to set up a foundation in his name to honour his deeds while on earth and sustain his legacies.

In her response, Mrs Mobolaji Daba, the widow, described him as a special being.

“I didn’t know how great he was until we lost him.

“The late veteran broadcaster was loved by many people.

“He prides himself more as a broadcaster than an actor,” she said.

She said that the late Sadiq Daba had been battling with an ailment since 2013, but it was made public in 2017.

“Late Sadiq Daba was a force to reckon with in the Nigerian movie industry.

“Even when we visited England, foreigners approached him, reminding him of the unique roles he played in some movies,”she said

According to her, Sadiq Daba was a caring husband, jovial and loved by everyone around him.

“People will walk up to him and say we love you: to the extent that some people were hell bent on paying for whatever he bought at the mall.

“He will be happy where he is now that the Nigeria Union of Journalists, Lagos Council came to console with the family he left behind,” Mrs Daba said.

The News Agency of Nigeria (NAN) reports that the ace broadcaster and Nollywood actor died on Wednesday evening at a Lagos hospital.

His last movie appearance was in Kunle Afolayan’s movie , ‘Citation’ which was released in October 2020. (NAN)