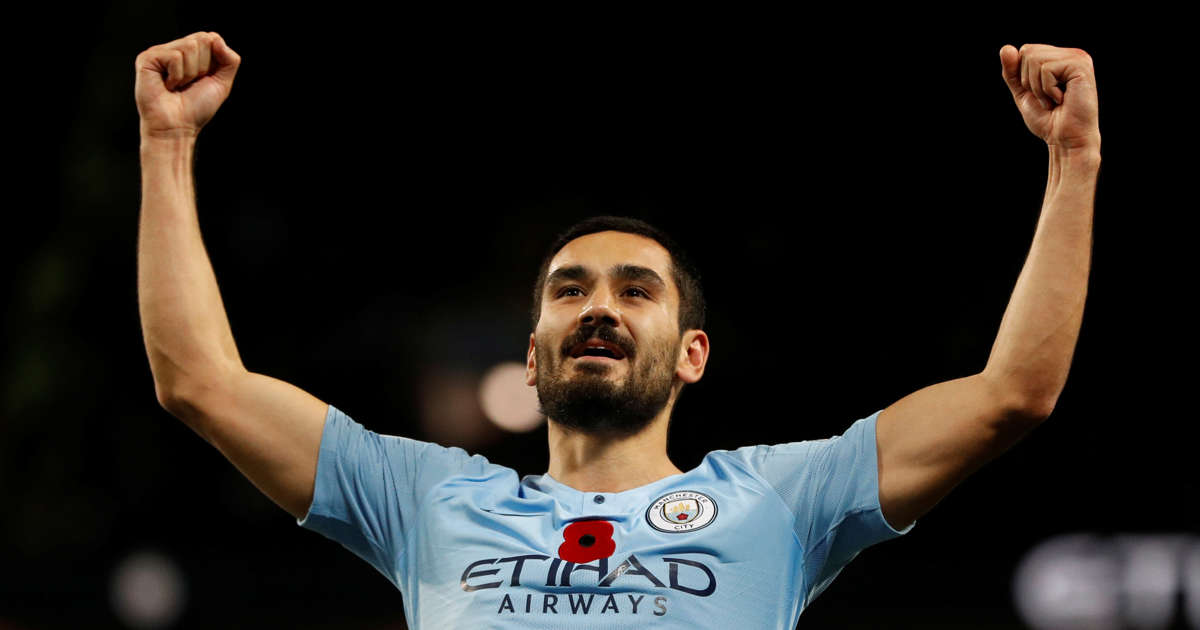 With this victory Manchester City surely killed any lingering hopes Manchester United had of competing for the league title.

José Mourinho’s side made a fight of it but City always appeared a class – at least – above and left United staring at a 12-point gulf to the leaders and seven from a Champions League berth.

Pep Guardiola made one change from the previous league outing, preferring Riyad Mahrez to Leroy Sané, a surprise considering the German’s flying form. Alexis Sánchez could also count himself unlucky to be dropped for similar reasons as Mourinho made four changes from the win at Bournemouth. Marcus Rashford replaced Sánchez at No 9 and Jesse Lingard, Marouane Fellaini and Ander Herrera came in for Juan Mata, Fred and Paul Pogba, who failed a late injury test.

City soon began enjoying the kind of space that makes them lethal. First a raking Fernandinho pass was collected by Bernardo Silva and he let go with a 30-yard shot that narrowly missed to David de Gea’s left. A few moments later David Silva got in behind United but no City man could finish.

Twelve minutes in and the visitors capitulated. Ashley Young failed to tackle David Silva, who turned the ball around the corner to Raheem Sterling. His cross curved in front of De Gea and Luke Shaw allowed Bernardo Silva to ping the ball back across goal, where David Silva was waiting to crash home for a seventh time this season.

The contest was unfolding inside a raucous Etihad Stadium, the atmosphere as vibrant as would be hoped for this occasion. By the midway point of the half United had, at last, gone some way to quietening their opponents and the crowd. Fellaini, Rashford, Herrera, Shaw, Lingard and Anthony Martial were starting to combine and an effort from the latter crashed off John Stones to leave him momentarily floored. This new-found composure was illustrated by a dinked left-foot pass from Fellaini to Young along the right as City were pinned back: hardly a regular experience for them at this venue.

United had managed to compress the game into the middle third – a far safer area than that near their goal. This had Guardiola shaking his head and the visitors able to launch the odd attack as when Shaw found Martial in City’s area, though the No 11 could not control the ball.

Guardiola’s men ended the half as they began, bombarding United’s goal as the two Silvas again terrorised and Sergio Agüero might have doubled the lead when the Portuguese one played him in: he could only find the side-netting.

Given the gap in points, a win was desperately required if United were to keep any title pretensions alive. Instead City dealt them a hammer blow. Lingard fumbled a regulation control near halfway, Bernardo Silva pinged the ball to Agüero and when he swapped passes with Mahrez the Argentinian smashed home a ninth derby goal to go level with Sir Bobby Charlton.

This put the volume level through the roof and, when Fernandinho put Sterling in, the forward might have made it game over if he had not dawdled. Instead Lingard was replaced by Romelu Lukaku and a Mourinho substitution was again successful. As with the introduction of Juan Mata against Juventus on Wednesday, Lukaku’s entrance led to a goal. Martial put the ball through and Ederson inexplicably challenged and pulled the centre-forward down.

Anthony Taylor awarded the penalty and Martial slotted the ball to Ederson’s left, the Frenchman’s seventh goal of the campaign arriving just before the hour to set-up a fascinating final third of the game.

It was now the toe-to-toe affair Mourinho – and the neutral – hoped for. A Fernandinho shot was saved low to De Gea’s right, Lukaku headed a corner clear and, on 72 minutes, Mourinho went for it via a double substitution that removed Herrera and Rashford for Sánchez and Mata. Guardiola answered by bringing on Ilkay Gündogan for Agüero.

The City manager’s move worked a treat as the German confirmed the win with a late strike when Nemanja Matic was left ball-watching. Gündogan’s finish was as accomplished as the move that created it: a sweetly rhythmical, 44-pass sequence that offers a microcosm of the current difference between the blue and red half of Manchester.

If United had fashioned this it would be hold-the-front-page news. For Guardiola’s supreme team it is merely par for the course. They enter the international break in fine mood. In contrast Mourinho’s men remain, at best, a work in progress.