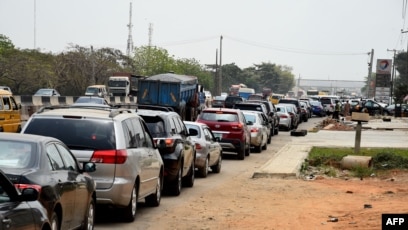 Africans are feeling the pinch caused by soaring global energy prices, say analysts, even in countries like Nigeria and Angola that are major exporters of crude oil.

While that handful of oil producers is seeing an increase in revenue – especially since the Russian invasion of Ukraine on February 24 – much of the continent lacks refining capability, forcing countries to pay high prices to import gasoline and other petroleum products from Asia and Europe.

The continent is further affected by increasing costs for natural gas, a key component of nitrogen-based fertilizers used in food production.

With salaries largely stagnant, more than two-thirds of Africans feel pressured by the rising prices, said Franklin Cudjoe, founding president of the Ghana-based Imani Center for Policy and Education.

“The continent is affected simply because we depend largely on global oil suppliers, since not many African countries have [their own] oil products,” Cudjoe told VOA.

Prices spiked on the global oil market after the invasion of Ukraine triggered a wave of international sanctions against Russia, one of the world’s leading exporters of crude. The price briefly climbed to over $120 per barrel this month before settling down to $103 per barrel on Friday.

The surge in energy prices is helping to fuel inflation across Africa. In Ghana, for example, overall consumer price inflation was pegged at 15.7% year-on-year in February compared with 13.9% in January, the country’s Statistical Service said last week.

Gasoline costs climbed, too. In Harare, the per-liter price climbed from $1.41 to $1.69 from Tuesday to Wednesday.

The surge in food prices was the biggest driver behind consumer inflation in Egypt, it rose by 8.8% in February – the sharpest increase in nearly three years, according to the state statistics agency, CAPMAS.

Cudjoe said it was crucial for governments and regional bodies such as the African Union to build defenses to cushion consumers in times of economic uncertainty.

“Even if it means building defenses in terms of the provision of food,” said Cudjoe, adding, “I could imagine Nigeria, if it had had its way, it could be selling foodstuff to most countries at reduced rates by now.”

“There must be that urgency of building for themselves defenses, funds that would make us sustain ourselves — at least to prevent us from being completely annihilated by these uncertainties in the world.”

Chibamba Kanyama, an economist in the Zambian capital of Lusaka, said suspending fuel taxes would be “the most ideal thing to do now under the circumstances” to cushion consumers and industries.

“African governments must find a way of responding,” he said. ‘It is a choice of whether to reduce taxes to lower the prices or to maintain the price levels and use the revenues to subsidize the most vulnerable in society.”

But Kanyama also suggested that the geopolitical crisis involving Russia and Ukraine – both big grain exporters to Africa – may create opportunities for African producers.

“Supply countries like South Africa, with robust and highly mechanized systems, may find a window of exporting [commodities] like wheat and other products to fill the gaps left by Russia and Ukraine,” Kanyama said.

Kanyama also said support by the international community – for instance, in the form of debt relief for some African nations – is welcome.

He noted that the Group of 20 – which encompasses seven industrialized nations, some countries with strong or fast-growing economies, and the European Union – “is trying to offer some debt relief.”

“Some other countries, such as Zambia, [are] undergoing debt restructuring processes and an IMF program, and to me, this is the only way out of the crisis,” Kanyama added. -VOA News

Prepaid meters to be developed in Nigeria to address metering challenges