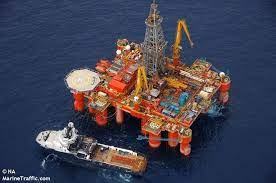 Nigeria based firm General Hydrocarbons Limited (GHL) has engaged Dolphin Drilling located in Aberdeen on a yearlong contract valued at  $96 million (£84m) to carry out its drilling scope.

Under the arrangement work is expected to kick off in the fourth quarter of this year.

The Blackford recently completed work in the Gulf of Mexico for state-owned oil firm Pemex.

It will now mobilise to Las Palmas for a special periodic survey prior to commencing operations in Nigeria.

Bjornar Iversen, chief executive at Dolphin Drilling said: “We are proud to announce the final award of the Blackford Dolphin contract, proving our position in the niche moored semisubmersible market.

“Dolphin Drilling has attractive assets, a strong team and a solid platform to leverage on the favourable market development with improved rates.

“The contract for Blackford Dolphin underlines the potential of the company and its assets, and we believe Dolphin Drilling will capitalise on the continued expected tight rig market for the rest of the fleet.”

Having recently announced its activation on the Euronext N-OTC list in Norway – after a three year absence from the capital markets Dolphin Drilling expects to be listed on the Euronext Growth Oslo later this month.

In addition to the Blackford, the company also owns and operates the Bideford Dolphin and Borgland Dolphin rigs.

It is planning to bring the latter across the North Sea from Norway to support the UK’s energy security push.

Industry regulator the North Sea Transition Authority will open a new offshore licensing round imminently, with the aim of securing more oil and gas supplies.

Energy costs across Europe have climbed severely in the last year due to continent-wide shortages, amplified by economic sanctions imposed against Russia.

It means offshore oil and gas drilling is enjoying a comeback, and a touted supercycle in rig day rates has arrived.

Mr Iversen said: “Basic rates for rigs are going up, contracts are longer and high spec rates are going up, all because of a lack of assets. The UK market will move summer 2023, followed by Norway the following year.

“There will not be enough rigs in the North Sea to do the work, and we see a supercycle coming that will last for, potentially, up to seven years.”