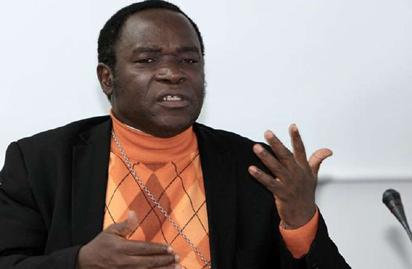 Bishop Matthew Kukah of the Catholic Diocese of Sokoto State, has advised the people of Anambra to come out and exercise their franchise during Saturday’s Governorship election.

Kukah gave the advice in an interview with newsmen during the Independent National Electoral Commission (INEC) stakeholders’ meeting on the state election in Awka.

He advised voters in the state not to be afraid to exercise their political right, saying whether you vote or not you have made a decision that you will live with the consequences.

“If you decide not to vote, it then means that the candidate you don’t want to win may probably be the one to win the election.

“And you have to live with the consequences, to a very little extent, except you say that our lives are in the hands of God.

“I do not think that any citizen of Nigeria should feel so afraid of their lives that they will be afraid to live up to their political responsibility.

“Whatever reservations anybody may have, this is a family affairs.

“It is not that we are in the military which somebody has been imposed on the people of Anambra, you are choosing from among themselves,” Kukah said.

The religious leader said he was in the state in company of the chairman of INEC to encourage the people of Anambra people to allow free, fair and credible elections.

Kukah advised the people to realize how privileged they were in politics and economic development of Nigeria.

He said that the state had produced great Nigerians, including former President Nnamdi Azikiwe; former Vice President, Alex Ekweme; former Senate President, Chuba Okadigbo; former Vice Chancellor of the University of Ibadan, Prof. Kenneth Dike, and “Cardinal Arinze who would have been a Pope.”

“Anambra has no business being hesitant on issues of our democracy. This country is ours to fix and Anambra has the manpower.

“Each of the people contesting this election is literally qualified to contest for the presidency of Nigeria,” Kukah said.

Also in an interview with newsmen, the Director of Programs, YIAGA Africa, Cynthia Mbamalu, expressed fear that there maybe voter apathy on Saturday, given the security situation and number of people yet to collect their Permanent Voter Cards (PVCs).

Mbamalu said the focus in the next two day should be inspiring the people of the state to come out to vote on Saturday.

“The confidence is dependent on two factors, security agencies being able to secure the place and guarantees safety of personnel and voter materials.

“The other is also the work of INEC in the next couple of days.

“If these factors are met, I believe that you can see a reasonable number of people coming out,” she said.

Mbamalu advised security agencies to leverage on the media to instill confidence in the people of the state that the number of security deployed for the election was to safeguard them.

She, however, advised against over concentration of the security personnel in one location, rather, they should ensure a balanced spread.

Mbamalu also advised the security in their engagement to be professional and civil.

Ezenwa Nwagwu, a Board Member of YIAGA Africa, advised the people of Anambra to turn out en masse on Saturday to reverse history of voters apathy in the state.

He said that Nigerians are waiting to see the success of INEC’s new technology, Bimodal Voter Accreditation System (BVAS) developed for the election.

Nwagwu said that he is also looking out to see the level of professionalism that security agencies would bring to bear during the state election.