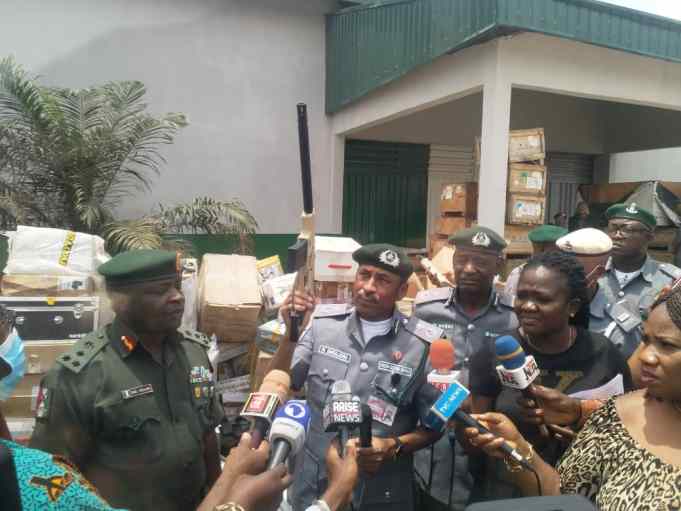 The Nigerian Military have taken possession of imported drones and other Military wares intercepted by the Nigeria Customs Service, NCS.

In line with their tradition, the NCS, has handed over 679 sets of drones and 638 packets of military wares to the Nigerian Army in Lagos.

The illicit drugs were said to have been imported into the country from India, Hong Kong, and Dubai and bearing different waybills and different names.

The owners of the siezrd items are currently on the run, but efforts are on to apprehend them.

The Customs Area Controller, Murtala Mohammed Area Command (MMAC), Sambo Dangaladima, said officers and men of the Command are duty bound to ensure that the set objectives of the Comptroller General of Customs, Col. Hameed Ali (RTD) is achieved.

Dangaladima said in line with the set target, officers of the Command worked assiduously round the clock and in synergy to tackle proliferation of arms and ammunition and military wares which, according to him, is against the internal security of the country.

“We are handing over a total of 679 sets of drones and 638 packets of various military wares valued at N379,203,818.00 to the Nigerian Army, 108 packets of tramadol (225mg) containing 4,492,650 tablets, valued at N2,823,950,000 and 78 packets of dry khat N376,125,000.00 to the National Drug Law Enforcement Agency (NDLEA). We are also handing over 54 packets of various types of non-compliant pharmaceutical products, valued at N310,240,458.00 to the National Agency got Food Drug Administration and Control (NAFDAC) in accordance with the extant laws that govern the agencies and their responsibilities and interdepartmental cooperation.

“While Dry Khat is totally prohibited, the non-compliant pharmaceutical products were seized because they are suspected to be fake drugs without NAFDAC registration/approval certificates.

“These items were imported with various Air Wale Bills (AWBs) at different dates/period from different ports of origin, enroute different ports to Lagos as final destination. We have on record 34 AWBS of Tramadol that are from India as port of Origin, 17 of them came into Lagos enroute Addis-Ababa.

One came in enroute Hong Kong while the rest came from Addis-Ababa to Lagos as final destination” he added.

Dangaladima further revealed that the non-compliant pharmaceuticals are from Pakistan but that they came into Lagos enroute Dubai and Addis-Ababa.

He said the proliferation of arms by criminals was becoming worrisome, noting that it is currently difficult to identify real soldiers from fake.

Other agencies who were on ground to receive the seized items are representatives of NDLEA and NAFDAC.

FIRS Celebrates Chevron, Others For Being Tax Compliant