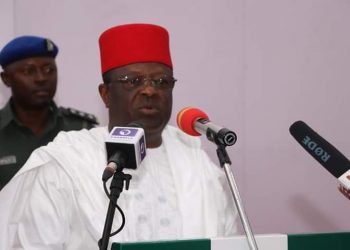 The Governor of Ebonyi State, David Umahi, has opted negotiation with bandits to ascertain their grievances and find the way forward.

Umahi made the declaration on Friday, April 30, in Abakaliki at the presentation of 40 Toyota Sienna vehicles as well as 20 Hilux vans to security agencies for enhanced operations in the state.

The Governor directed local government chairmen and also the Christian Association of Nigeria, CAN, to identify the bandits and present them for debriefing.

“I want to talk to the bandits and empower them as we cannot continue to kill ourselves and destroy public infrastructure.

“The bandits are our children and I am pained when they or the security agencies are killed.

“I want to ascertain their grievances against the Ebonyi or federal government; collate the facts for discussions to commence,” he said.

Umahi expressed disappointment over the announcement of guidelines for the 2023 elections; noting that the nation was at a crossroads for such engagement.

“Let us forget about the 2023 elections with the leaders taking responsibility for the situation and discussing a way forward.

“No one takes money to the grave and when we hear a gunshot; we will run and abandon the money we amassed.

“This is not a period to discuss political parties; but ensure that the resources of this nation which can truly transform it is judiciously utilised,” he said.

Umahi debunked the insinuation that members of the Indigenous Peoples of Biafra (IPOB) or Eastern Security Network (ESN) were after him; insisting that he has discharged his duties to the people.

Dr Kenneth Ugbala, Secretary to the State Government said that the presentation was the first batch; of the 100 sienna vehicles and 40 utility vehicles to be procured for security agencies.

“The governor has fully paid for the 40 sienna vehicles and 20 Hilux vans; being presented as the recipients are charged to judiciously utilise the vehicles.

“I want to thank the governor for this feat despite the prevailing economic challenges; as he had earlier distributed 70 utility vehicles to security agencies in 2019,” he said.