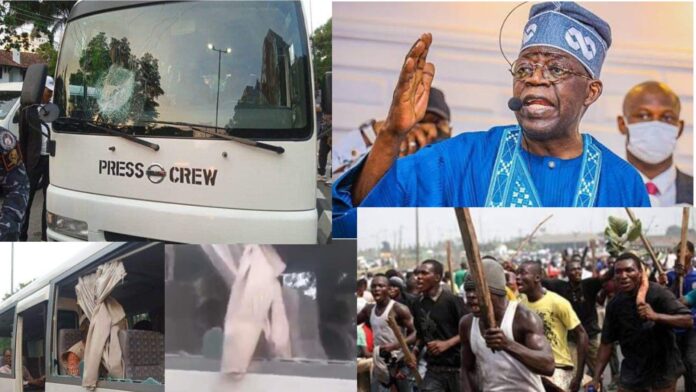 The Nigeria Police Force, Zone 2 Command Headquarters has arrested eight suspects in connection to the attack of the press convoy of the All Progressives Congress (APC) Presidential Candidate, Alhaji Bola Ahmed Tinubu.

The Zonal Public Relations Officer, SP Hauwa Idris-Adamu, revealed this during a press conference at the Zone 2 Command Headquarters in Lagos.

According to Hauwa, some of the suspects had confessed to be members of various cults even as she acknowledged that a principal suspect had been identified as the sponsor of the crime.

She said, ; These are suspected cultists and hoodlums who attacked the press crew of the APC entourage on the day they were to visit the Oba of Lagos. You would recall that the incident occured at noon on June 19th, 2022. The press convoy was attacked and this was being sponsored by someone who we wouldn’t mention until he is in Police custody.”

“Following investigations, these suspects were arrested and they all confessed to have committed the crime. They also belong to various cult fraternities. Investigations are still ongoing and we would get back to the press as soon as we have the principal suspect.”

In a separate incident, the zonal spokesperson displayed nine suspects arrested in connection with theft of optic fiber cables worth about N80million.

Hauwa disclosed that the arrest was possible due to an Intel received on June 20th, 2022.

“The company affected here deals in optic fiber and on that particular day seven (7) armed men stormed the facility and carted away with fifteen drums of the fiber cables which the company estimated to be worth over N80million.”

“Upon receipt of this petition, the AIG instructed the Monitoring Team of the Zone 2 Command led by CSP uba Adams to swing into action immediately. Two days later, nine (9) suspects were arrested. These are the suspects and amid the ongoing investigations we have recovered sixteen rolls of those stolen drums,” the Police spokesperson explained.

SP Hauwa, however, encouraged Nigerians to speedily contact the Police when they notice suspicious dealings, noting that the successful arrest on the optic fiber theft is a result of valuable Intel provided by citizens.

One of the suspects who was the only female claimed that the crime was perpetuated by her husband and she was being held in his place because the fiber cables were found at their residence.