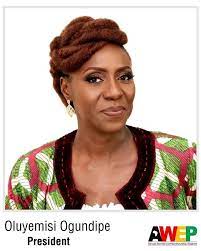 Ogundipe , who made the call during a news briefing  in Lagos, said that product standardisation was important to promote export of local products.

The AWEP president said that export  was the main focus of the group, made up of women entrepreneurs.

According to her, export is important to the growth of the nation’s Gross Domestic Product (GDP).

Ogundipe noted that the National Agency for Food and Drug Administration and Control (NAFDAC) and Nigerian Customs Service  (NCS) also had huge roles to play in ensuring seamless export of local products.

She said these organisations must be friendly and more efficient in the discharge of their operations to ensure ease of doing business.

“As women entrepreneurs, one of our objectives is to ensure women are well-positioned to be able to export their produce.

“We have realised that until the Nigerian Customs, NAFDAC and SON play their roles well, our objective won’t be achieved.

“We call on these organisations to ensure they are friendly and  more efficient in discharging their duties so that we can have seamless process of exportation of local products.

“We want to make ease of doing business a reality through access to market and finance, which have been identified as the major challenge of every woman in business,” she said.

Ogundipe said its Annual General Meeting (AGM) would hold by Nov. 30, adding that women would be educated on how best their produce can be better packaged for global acceptance.

She said that during the AGM, funds would  be raised for women entrepreneurs who were victims of the recent flood incidence across the country.

According to her, those women’s produce will be exhibited free to help them recover from their losses.

She said AWEP was a business support organisation with the aim of helping women’s businesses to be competitive and of global brand.

“The theme for the AGM is “Launch Out”, this is calling out to women who want to start businesses afresh and those who have started but stopped due to some challenges, to launch out now.

“We want to expose the rural women to formal businesses such that they can register their businesses and operate smoothly, ” she said.

Mrs Olusola Sowemimo, Chairman, Local Organising Committee for the AGM, said t that the programme would feature workshop sessions where women would be curated to share their stories in most compelling ways to encourage others.

“A lot of women  need training to get involved in businesses, but they don’t have the required knowledge, we train them and make government realise that women need guidance and support.

“Over the years, we have been able to record lots of success  stories in Abuja and Kaduna especially.  We have many women exporting locally made produce and are doing well now”.

Ms Betty Adepoju, AWEP Public Relations Officer, and a digital strategist, said that there was need for women to be digitally savvy as the AGM would also feature digital training which would help in the process of marketing local products.

Adepoju said that most women were not taught to be entrepreneurs and the essence of the digital training was to catch the women young.

She noted that the women would be exposed to eight classes of training. One physical and the seven other classes would be done online.

Adepoju  said that the AGM would also feature exhibitions of local products made by women entrepreneurs as the programme would create opportunity for them to network and market their wares. (NAN)