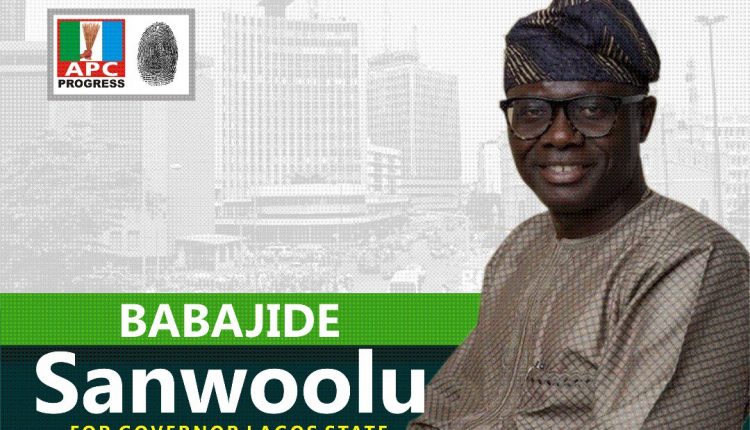 Indigenes of Cross River and Akwa Ibom states resident in the state, yesterday, conferred the title, Utuenikang (the Shining Light), on the governorship candidate of the All Progressives Congress (APC) in Lagos State, Mr Babajide Sanwo-Olu.

At an elaborate Akwa-Cross Cultural Festival held at the National Stadium in Surulere on Wednesday, Sanwo-Olu’s wife, Dr. Ibijoke, was also conferred with a title of Obong Awan (mother of all), while his running mate, Dr. Obafemi Hamzat, got the title of Ata-Ufan(true friend).

Explaining why the group endorsed Sanwo-Olu among the contenders, President-General of Akwa-Cross Worldwide, Dr. Samson Unyime Samson, said the APC candidate, aside possessing a sterling academic credential, was rated as the best because of his “strong pedigree” and achievement in public and private sectors.

Samsom, who described himself as the representative of the gods of Akwa-Cross indigenes on earth, said the group had confidence in the APC governorship and deputy governorship candidates, noting that Sanwo-Olu and Hamzat would bring their experience in public administration and technocracy to bear in governing the state.

He said: “Today, we are installing our friend, Mr Babajide Sanwo-Olu, as Utuenikangfor all indigenes of Akwa Ibom and Cross River states in Lagos. This chieftaincy title is of the highest order to be bestowed in non-indigene. We are giving the title to Sanwo-Olu because his achievements in public and private sectors have shone lights on many people. We also believe that his election as Lagos State governor will bring more good to our people.

“I have the instruction of the gods to proclaim Sanwo-Olu as the next governor of Lagos. Going by this instruction, we have adopted the APC candidate as our choice and all the indigenes of these two states who are living in Lagos have endorsed Sanwo-Olu. Our people will partner with the government of Sanwo-Olu to ensure that our welfare and constitutional rights are not trampled upon.”

Samson, however, urged Sanwo-Olu to address the marginalisation of indigenes of Akwa Ibom and Cross River states in governance in Lagos, stressing that the group had never been given a sense of belong in the state unlike their Igbo, Edo and Hausa counterparts.

Responding, Sanwo-Olu described the title as a “duty call” to lead a government that will work for all and prioritise service delivery. He reiterated that his administration would run “all-inclusive governance”, saying Lagos is home to all Nigerians.

He said: “Our aim to govern is to pursue a cause that will work for all the people living in Lagos. We are not going to discriminate against anyone based on tribe, religion, status or political belief. The endorsement of our candidacy by various ethnic groups will be a reminder to us that, we will only be successful in achieving our plans for ‘Greater Lagos’ if we efficiently leverage on the diversity of the residents.”

Guests at the event were entertained by Ekombi and Uta cultural troupes of Cross Rivers and Akwa Ibom states. The Ekpe masquerades also performed to amuse the guests.