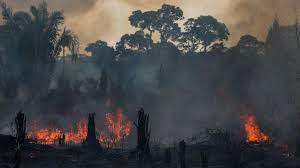 The European Union, EU, has placed a ban on import of products linked to deforestation under its new law.

Household goods such as coffee, chocolate, and some furniture will have to pass strict checks to ensure forests weren’t damaged to create them.

Environmental group Greenpeace called it a breakthrough, but some countries said the rules would hurt international trade.

The EU said the rules would cut carbon emissions worldwide.

The rules cover palm oil, cattle, soy, coffee, cocoa, timber and rubber that is imported into the EU.

They also cover anything derived from these products, such as beef, the EU said in a statement.

Pascal Canfin, the chairman of the European Parliament’s environment committee, said: “It’s the coffee we have for breakfast, the chocolate we eat, the coal in our barbecues, the paper in our books.”

Companies selling their products into the EU will have to prove their goods are not linked to deforestation, or face fines of up to four percent of their annual EU turnover.

An impact assessment from the European Commission estimated that the new law would protect at least 71,920 hectares (278 sq miles) of forest annually – around 100,000 football pitches.

It would also reduce annual global carbon emissions by 31.9 million metric tons per year, the commission said – roughly the same as the carbon emissions of Denmark in 2021, according to World Bank data.

The European Council – where member states agree policy – and the European Parliament are yet to ratify the agreement.

The law is enforceable 20 days after it is formally accepted, which is expected to happen next year, the European Commission told the BBC.

Once it becomes law, operators and traders will have 18 months to adhere to the new regulations.

Smaller companies will have 24 months to adapt.

Companies will have to specifically prove their goods were not produced on land that was deforested after December 2020.

The law change would have little or no impact on prices to consumers, a European Commission spokesperson said.

Environmental group Greenpeace said the agreement was a “major breakthrough for forests”.

The EU said it would work with outside countries to improve their regulation capacity, but some of the nations it trades with – including Brazil and Indonesia – said the rules would be burdensome and costly.

Last week, Canada’s Ambassador to the EU said the rules would hurt trade between Canada and the EU.

The Ambassador, Ailish Campbell, also defended Canada’s record on deforestation. Logging industry groups have said their operations meet high standards of sustainability, in part by ensuring that trees are planted in place of those that are harvested on public land, which is required by law.

The announcement comes on the eve of the COP-15 summit on biodiversity, which is scheduled to run from 7 to 19 December.