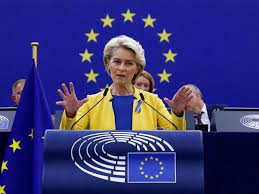 The European Commission is contemplating a revenue cap for companies producing electricity at a low cost and a “crisis contribution” from the extra profits of fossil fuel companies in a plan to raise $140 billion (140 billion euros) to cushion the energy crisis blow to European citizens and economy.

European Commission President Ursula von der Leyen, who made the disclosure on Wednesday, said, “Our proposal will raise more than 140 billion euros for Member States to cushion the blow directly. And because we are in a fossil fuel crisis, the fossil fuel industry has a special duty, too. Major oil, gas and coal companies are also making huge profits. So they have to pay a fair share – they have to give a crisis contribution,” von der Leyen said in her 2022 State of the Union Address today.

“These are all emergency and temporary measures we are working on, including our discussions on price caps,” the Commission’s president said, without referring to specific price caps on gas, or Russian gas only. This was the only reference to price caps in von der Leyen’s speech today.

Since von der Leyen first said last week that the Commission would be working on a price cap on Russian gas to deprive Putin of revenues for the war in Ukraine, deep divisions have emerged among EU member states regarding price caps on gas.

At least ten out of 27 governments are reportedly opposing such a move over concerns that Putin might retaliate with a complete halt of gas supply to the whole of Europe. Germany, Europe’s biggest economy and the most affected EU member by the now-shut Nord Stream pipeline, isn’t supportive of the plan, either. Another group of EU countries, which include France and Poland, pushed for a price cap on all imported gas.

However, the European Commission is wary of this idea because a cap would hurt Europe’s ability to draw in large volumes of LNG if prices elsewhere are higher.

Despite the fact that the EU has overshot its gas storage target for this time of the year, “unfortunately that will not be enough,” von der Leyen said today, adding that the EU must continue to look to lower the price of gas.

The EU and Norway a major supplier of gas and an ally to the bloc have agreed to set up a task force on the issue. The Commission will also work to establish “a more representative benchmark” for Europe’s gas prices than the Dutch TTF hub, von der Leyen added.