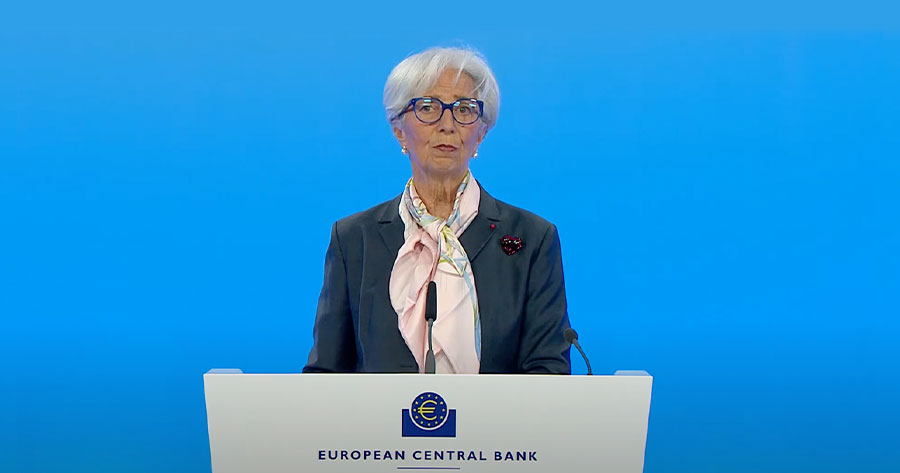 The European Central Bank, ECB, will most likely end its experiment with negative interest rates by the end of the third quarter, President Christine Lagarde said on Monday, all but confirming growing speculation of multiple interest rate hikes over the summer.

“Based on the current outlook, we are likely to be in a position to exit negative interest rates by the end of the third quarter,” Lagarde said in a blog post on the ECB’s website.

She added that the Frankfurt-based institution will probably end its net purchases of bonds “very early in the third quarter.”

The ECB’s guidance is that it won’t raise interest rates before ending quantitative easing.

It’s extremely rare for an ECB President to use such clear language committing to a specific course of action so far ahead of the bank’s official policy meetings, and her intervention comes at a time when the ECB’s credibility is under unprecedented pressure, with inflation running at near 30-year highs.

Equally rare was Lagarde’s analysis that the euro’s weakness is partly to blame for the ongoing inflation period.

“In particular, a large share of the inflation we are experiencing today is imported from outside the euro area,” Lagarde said. “This is acting as a terms of trade “tax,” which reduces the total income of the economy – even if we take into account the higher prices being earned by exporters.”

Lagarde said that over the past four quarters, the euro’s depreciation had been tantamount to a transfer of 170 billion euros ($181 billion), or 1.3 per cent of its GDP, to the rest of the world.

The ECB has been much slower than many other advanced economy central banks to move to a tighter monetary policy stance as inflation has overshot around the world, and Lagarde again emphasized why that was.

“The tools we were deploying…aimed at combating persistent too-low inflation…are no longer appropriate,” she said. “But we are also not facing a straightforward situation of excess aggregate demand: in fact, supply shocks are raising inflation and slowing growth in the near term.”

As such, Lagarde reiterated her desire for a “gradual” and data-driven normalization of monetary policy. However, she added that the bank may have to act more quickly.

“There are clearly conditions in which gradualism would not be appropriated,” she acknowledged. “If we were to see higher inflation threatening to de-anchor inflation expectations, or signs of a more permanent loss of economic potential that limits resource availability…we would need to withdraw accommodation promptly to stamp out the risk of a self-fulfilling spiral.”