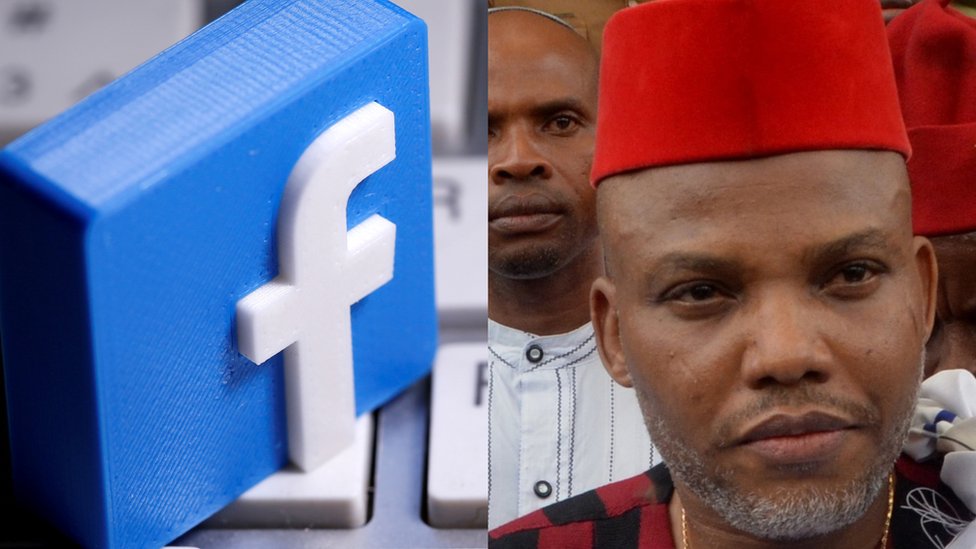 Facebook, has said that it has removed the page of Nigerian separatist leader Nnamdi Kanu for violating its rules on harm and hate speech.

Mr Kanu’s page was removed for repeated violation of its community rules, the social networking site told the BBC.

He had posted a video of a militia group attacking and killing cattle in a herders’ settlement.

He also used the live broadcast to accuse herders of destroying farmlands in eastern Nigeria.

The conflict between herders and other groups is currently one of Nigeria’s hottest political issues.

Mr Kanu leads the Indigenous People of Biafra (Ipob), which campaigns for independence for Nigeria’s south-eastern region, where the ethnic Igbo people form the majority.

The herders are mostly from the northern Fulani community.

Mr Kanu, who also has British nationality, used his Facebook page as a key platform to communicate with his followers around the world.

The militia carrying out the attack in the video he posted are suspected to be from the Eastern Security Network, which Mr Kanu set up.

A Facebook spokesperson told BBC Igbo: “In line with our rules, we removed Nnamdi Kanu’s page for repeatedly posting content that break those Community Standards, including content that violated our rules on coordinating harm and hate speech.”

Kanu has a huge following in south-eastern Nigeria.

Ipob says it will appeal against the ban, describing the action of Facebook “as not only baffling but too petty”.

“We wonder why a global social media giant like Facebook would allow itself to be used by agents of oppression in Nigeria to suppress the truth,” head of media Emma Powerful said.

Ipob is proscribed in Nigeria, which labelled it a terrorist organisation in 2017.

Nnamdi Kanu came to fame in 2009 when he started Radio Biafra and broadcast to Nigeria from London, using the platform to call for Biafran independence and urging his followers to take up arms against the Nigerian state.

How will this ban affect Nnamdi Kanu?

Before the ban by Facebook, he created an app called Ipob Community Radio and asked his followers to get on it.

He’s also asked his followers to move to Twitter but if he continues with the same rhetoric and controversial comments, he might not last long there.

He however appears to be more measured on Twitter, where he is currently trying to get verified.

At the moment he’s likely to resort to using the Facebook accounts of Ipob and Radio Biafra and the hundreds of Ipob-affiliated pages, which are not affected, but it would be interesting to see if he changes his tone.

But since that’s his selling point, this is probably unlikely.