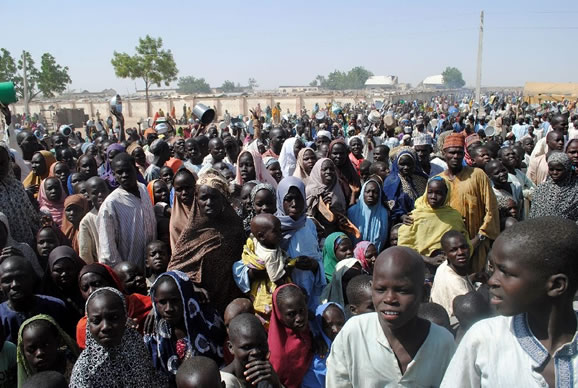 Federal Commissioner of the National Commission for Refugees, Migrants, and IDPs (NCFRMI), Imaan Suleiman, on Thursday disclosed that there are over 3.2 million refugees in Nigeria.

Suleiman spoke at the 42nd edition of the State House Ministerial briefing organized by the Presidential Communications Team.

She also said that the commission was building five resettlement cities for use by displaced persons stressing that Bono, Kano, Katsina, Zamfara, Nasarawa and Edo are the states where the pilot phase of the scheme was being executed.

The Federal Commissioner explained that the need to build resettlement cities became necessary as people lose their homes and means of livelihood during flood, communal clashes and other ways that could affect the wellbeing of people

According to her, the project resettlement city would entail building small cities because Persons of Concern (POCs) have three options of doable solutions.

“They can either locally integrate, resettle or they can go back to their homes but sometimes they are unable to go back home and that is why there is need for building of new communities or strengthening the capacity of their host communities.

“We are in the third phase of our resettlement city project but the pilot phase is in Borno State, Kano, Katsina, Zamfara, Nasarawa and Edo State. Most of them are now at between 70-90 percent completion but that of Edo State is about is about to take off. ”

Suleiman disclosed that the three major challenges faced by the commission include security, rising number of refugees and funding.

According to her, “the major challenge is security. In managing humanitarian crisis there are areas that we are supposed to reach and we are unable to do so and that is a major problem because even when they are undergoing the crisis, sometimes the places are not secured but they still require support.

“Then thirdly its funding, there is hardly any funds for anything and they required to be able to intervene quickly for these people,” she added.

Makinde Says His Father Impacted Dignity To Him