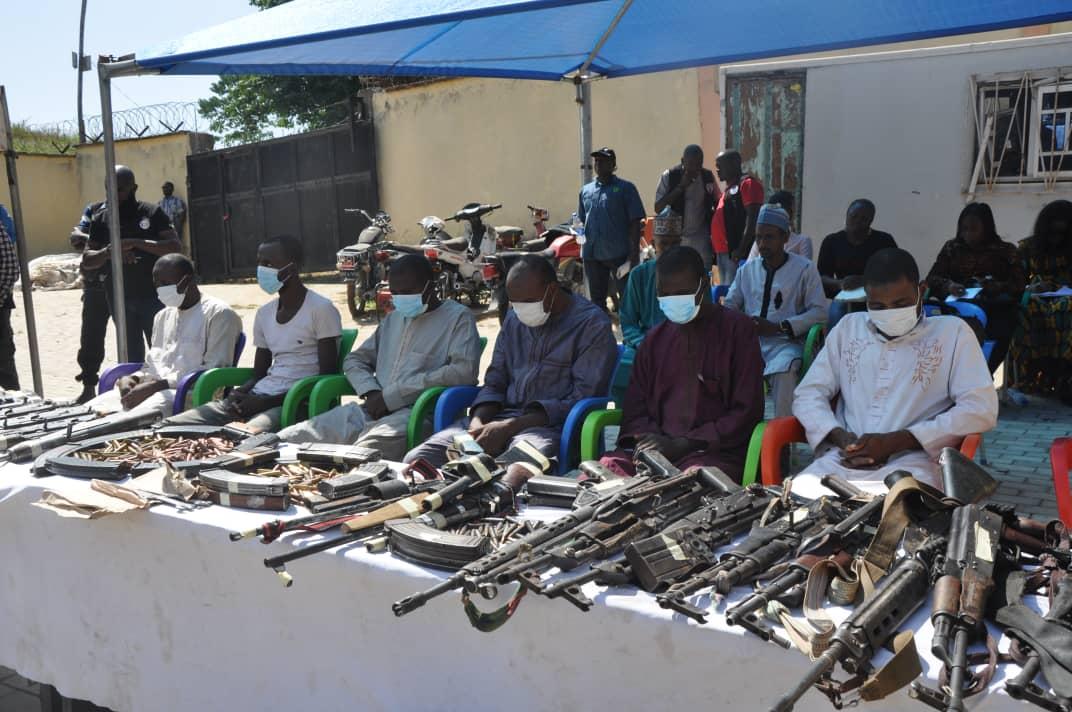 The Intelligence Response Team of the Force Investigations Bureau (FIB-IRT) has intercepted a group of kidnappers in action along the Abuja-Kaduna Highway.

CSP Olumuyiwa Adejobi,said that the kidnappers were intercepted following a distress call received by the police.

“Upon receiving a distress call that kidnapper had invaded Bandoko area of Kachia Local Government Area of Kaduna State, a village near Katari along Kaduna-Abuja Road, and had kidnapped one of the residents, operatives of the FIB-IRT attached to Operation Puff Adder chased the invaders, rescued the victim, arrested one of the kidnappers and recovered a stolen Bajaj motorcycle.

“At about 11.30pm on the 29th of April 2022, some bandits attacked a house in Bandoko for the purpose of kidnapping a woman and gang rape her all night. The woman who sells ‘fura-denunu’ within the area had been monitored by the suspects before the attack.

“The invaders demanded for the key of the motorcycle of the 35-year-old husband, Jibril Saidu. After collecting the key, they forced him to remove his shirt and trousers, which were used to blindfold him and tie his hands to his back.

“They stole his bike, put him on the bike and escaped from the village into far away Gbadoko forest. Immediately they left, the mother of the husband raised alarm and the residents came out but could not chase after the invaders for the fear that the kidnappers may be armed with guns.

“The villagers immediately organized local vigilantes to secure the community and then sent distress call to the IRT operatives attached to Operation Puff Adder for urgent action. When the police arrived, the villagers assisted in showing them directions and they chased after the kidnappers.

“Around 5am on 30th of April 2022, the police officers were able to trace the invaders into their hideout at Gbadoko forest where the suspects on sighting the police officers, abandoned their victim and motorcycle and fled into the thick forest.

“The police officers continue their chase after them and were able to arrest one of the kidnappers, Abdulrahman Lolo, a 20-year-old herder.

“According to the victim, Jibril, “an unidentified group of persons invaded my house, flashed torchlights in my eyes and I couldn’t see.

“They threatened to kill me and my family if I do not cooperate with them. They ordered me to remove my cloths, and at the same time, requested for the key of my motorcycle, which I quickly surrendered to them.

“They used my cloths to blindfold my eyes and tied my two hands to the back. They led me out of the house to my bike and drove me away. I was rescued by the IRT men.” the statement read.

Further investigation by operatives of the FIB-IRT led to the arrest of another member of the gang, Mohammed Sanni, a 26-year-old herder. Both suspects confessed to the crime and are assisting the police with information.

According to the Abdulrahman Lolo, “I and one Abubarka Baya rear cows in the same village. Abubakar asked me to follow him to a Fulani ruga settlement in the same area.

“Our plan is to abduct a woman for the purpose of raping her, but it turned out to be kidnapping of her husband. We only made use of torchlights, cutlasses and sticks, not gun.

“Others who went together with me for the operation are: Sani, Abubakar, Umar and Seif. All of us are boys of Alhaji Lolo of Gadam Mallam-Mamam… the other boys mentioned have been going out for operations before, but this is my own first time. The role I played was to mount road and pass information to other members who escaped when police chased us.”

According to the Force PPRO, CSP Muyiwa Adejobi, the Inspector General of Police, IGP Baba Alkali, has directed the Commander of IRT, DCP Olatunji Disu, to ensure prompt prosecution of all cases and make sure peace return to Abuja-Kaduna highway.

Adejobi also noted that, police officers are more effective when members of the public provide them useful and timely information.