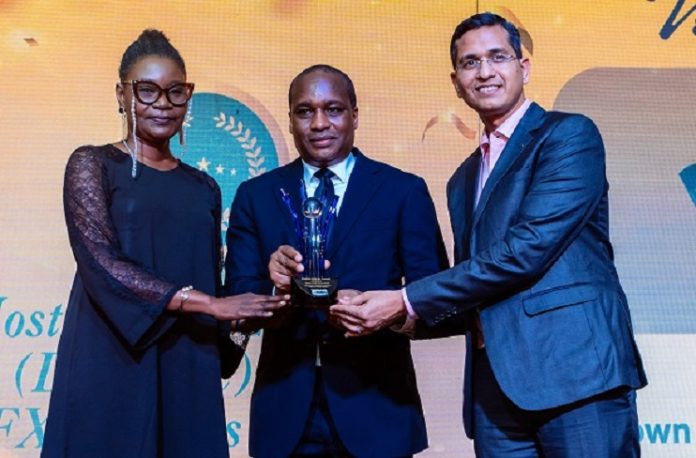 FMDQ Group Plc, has recognised the contributions of its market participants, including its Members, regulators, government agencies, local and foreign portfolio investors, corporates and a host of others, through the FMDQ GOLD Awards.

Instituted in 2018 to mark the 1 FMDQ Group Lustrum and now in its 5 year, the 2022 FMDQ GOLD Awards was commemorated in a grand ceremony, the first physical ceremony since the onset of the Coronavirus pandemic, on Friday, November 11, 2022, in Lagos.

The very well-attended prestigious GOLD Awards was headlined by the Vice President of the Federal Republic of Nigeria, Professor Yemi Osinbajo, SAN, GCON, as the Special Guest of Honour, ably represented by Mr. Alexander Okoh, Director-General, Bureau of Public Enterprises, brought together various stakeholders in the FMDQ markets and provided a platform to acknowledge and formally recognise the contributions of participants within the FMDQ markets for the one-year period covering October 2021 to September 2022. Delivering the Vice President’s Keynote Address at the Awards Ceremony, Mr. Alexander Okoh said “over the years, FMDQ Group has evolved from an over-the-counter market to a full-fledged Capital Market Holding Company, with five wholly owned subsidiaries. This is a laudable achievement.

It is pertinent to acknowledge that in order for the Nigerian economy to grow and ensure that businesses thrive, access to capital-raising channels and opportunities is a key prerequisite. I want to thank and commend FMDQ Group and its leadership, for the role you have played consistently in contributing towards filling this gap in Nigeria’s financial markets”.

The Awards presentation commenced with the FMDQ Leadership Awards Category which saw the Presidential Enabling Business Environment Council, represented by its Executive Secretary, Dr. Jumoke Oduwole, receive the FMDQ Capital Market Catalyst Award for the introduction of over one hundred and sixty (160) key reforms over a period to improve the nation’s business environment, with the Companies and Allied Matters Act, 2020, being the most impactful on the financial markets.

One of the highlights of the GOLD Awards Ceremony was the Farewell Reception in honour of the Retired Group Chairman of FMDQ Group, Dr. Okwu Joseph Nnanna, as well as fourteen (14) other FMDQ Directors who retired between January 2018 and September 2022, for the roles they played in the growth and development of FMDQ and its markets.

“Under your astute leadership, FMDQ evolved from an OTC Market into Africa’s first vertically integrated FMI group, with three (3) SEC-registered capital market subsidiaries – FMDQ Securities Exchange Limited, FMDQ Clear Limited and FMDQ Depository Limited – thereby entrenching its presence across the financial market value chain (i.e., pre-trade, trade and post- trade). In this same period, two (2) other subsidiaries, FMDQ Private Markets Limited and iQx Consult Limited, were operationalised to extend the private companies’ access to institutional investors, and to ensure operational efficiency and build resilience in the FMDQ Entities through technology and digitisation respectively. I thank you all for your resilience and guidance through what has been a very  challenging period for the markets, and the economy at large. Your innovative and patient leadership laid the foundations of the FMDQ Group we see today, and on which we build for the future”.

Dr. Nnanna, who served as the third Chairman of FMDQ Group from April 2017 to May 2020, amongst many laudable accomplishments, oversaw the growth of FMDQ from an organiser of the over-the-counter market to a full-fledged Securities Exchange and then Africa’s first vertically integrated FMI group. During his Farewell Remarks, Dr. Nnanna, represented by Prof. Joseph Nnanna, Chief Economist, Development Bank of Nigeria PLC, stated “serving as the Chairman of FMDQ for the three (3) succeeding years has been greatly fulfilling. It has been an honour to play my part in thrusting the Nigerian financial markets forward through FMDQ. I want to emphasise how much I appreciate the past Chairmen and my colleagues on the FMDQ Group Board for their unrelenting support and tenacity in delivering FMDQ’s mandate”. In commemoration of Dr. Nnanna’s epoch-making tenure, a special publication, the Agent of Change (Volume 3), FMDQ Group’s avenue for cataloguing significant milestones achieved during the term of a Board Chairman, was unveiled.

Another remarkable highlight of the GOLD Awards Ceremony was a playlet, centered on the role of lawyers and investment bankers in the financial markets, performed by representatives of the 2022 Summer Camp (Primary School Stream) of the

financial market awareness and literacy among students across all levels.

Speaking at the FMDQ GOLD Awards, the Group Chairman, FMDQ Group, Dr. Kingsley Obiora, represented by the Chief Executive Officer, FMDQ Group, Mr. Bola Onadele. Koko, appreciated all stakeholders who have worked tirelessly to ensure continuous depth, liquidity, and diversity in the Nigerian financial markets. Undoubtedly, your contributions, immense support, and unceasing willingness to collaborate, are a significant part of the FMDQ story. The Board of FMDQ Group remains committed to providing  strategic direction, maintaining robust oversight over FMDQ Group’s affairs, and ensuring the Group continues to tow the right path in meeting its objectives”.

The FMDQ GOLD Awards is underscored by the tenets of FMDQ’s GOLD (Global Competitiveness, Operational Excellence, Liquidity and Diversity) Agenda, FMDQ Group’s aspiration for the Nigerian financial markets, which will continue to be the compass and standards through which the Group measures the impact of its innovative financial markets’ solutions implemented in collaboration with its diverse stakeholders, towards the delivery of prosperity to Nigeria and Nigerians.