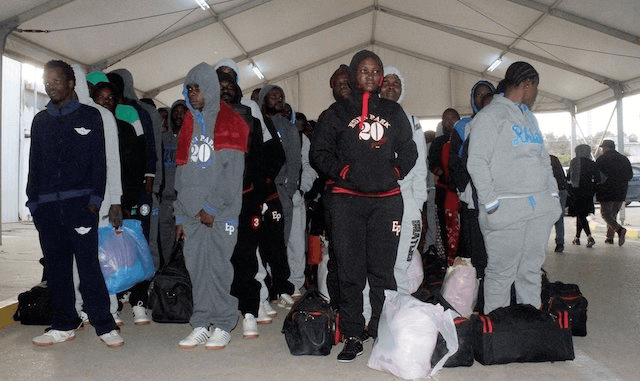 Forty Nigerians have been sent home by Italian authorities on allegation of various immigration and other offences.

The deportees arrived through the Hajj camp of the Murtala Muhammed Airport, Lagos aboard Air Meridiana with registration number E1 FNU.

Thirty nine of them were arrested and deported for immigration offences and one for drug related offence.

They arrived at about 8.30pm and were quickly profiled by security officials as they were later whisked away.

Alabi said 39 of the deportees were alleged to have committed immigration-related offences while one of them was allegedly involved in drug dealing.

He said the deportees were received by officers of the Nigerian Immigration Service (NIS) , the National Agency for the Prohibition of Trafficking in Persons (NAPTIP) and the Police.

Also on ground to receive them were officials  the Federal Airports Authority of Nigeria (FAAN) and the National Drug Law Enforcement Agency (NDLEA).

The  deportees were profiled by immigration authorities and were each given a stipend to facilitate their transportation to their respective states.

NEITI Pushes For Recovery Of $22b, N316b From NNPC