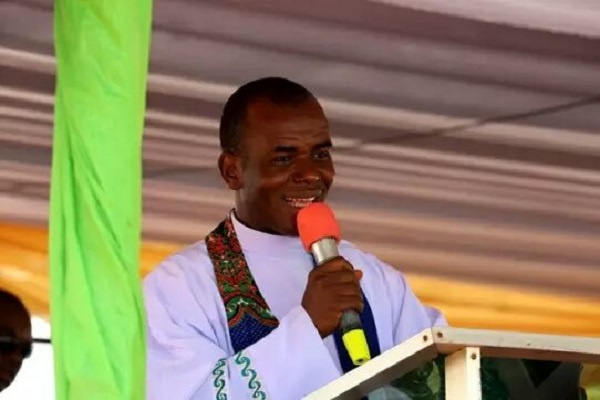 The Spiritual Director of Adoration Ministry Enugu Nigeria (AMEN), Rev. Fr Ejike Mbaka has apologized to the Catholic Church and Bishop of Diocese of Enugu State, Bishop Callistus Onaga, for the unruly behaviour of his supporters in Enugu State following his rumoured“disappearance“.

He tendered the apology while delivering his sermon on Sunday, May 9.

During the sermon, Mbaka asked Onaga to forgive him and his followers for their actions which have rubbed off negatively on the church.

Explaining what happened on the day his followers feared he had been abducted following a row with the presidency, he stated that he had no idea his members stormed the Bishop’s residence to cause havoc on May 5.

Mbaka added that when he heard, in his haste to get to his members and calm them down, he almost had an accident.

He noted; “I never knew that even a glass was broken. What I was praising you for was not for what was destroyed, but for your ability to search for your missing pastor. There was a lot of mixed information. The devil entered the story; the church did not kidnap me.”

The cleric also apologised to Bishop Onaga, the Catholic church in the state, and the universal Church; for the damage done by his followers at the Bishop’s house at Igbo Eze Street, Independence Layout Enugu, and Holy Ghost Cathedral, Ogui Enugu.

The priest also cautioned his supporters against violence; after some of them broke into the diocesan cathedral when his whereabouts were unknown for some hours.

Mbaka said he has no problem with the church; and restated that he remains loyal to the bishop.