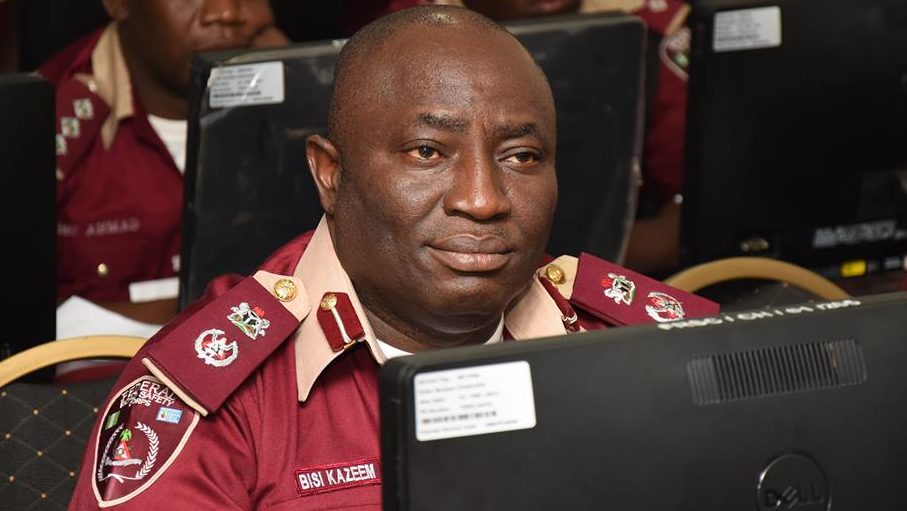 Yemisi Izuora
The Federal Road Safety Corps, FRSC, has continued to prove its capacity to enhance safe motoring environment.
This it is doing not only in the area of changing the general behaviour of road users through sustained and robust enlightenment campaigns, but through a record breaking reduction in road traffic crashes (RTC), fatalities and injuries during the just concluded operation zero exercise that lasted between December, 2021 to 15 January, 2022.
The Corps recorded during the last special patrol operations, a massive 26 per cent  decrease in number of people killed, 9 per cent decrease in RTC and also recorded 9 per cent reduction in the total number of people injured, as against the same period in 2021.
According to Bisi Kazeem, the Corps Public Education Officer, a total of 600 road traffic crashes (RTC) were recorded as against a total of 660 in the same period in 2020 representing 9% decrease. In the same period, 327 people were killed against 443 people in the same period in 2020 representing 26% reduction in fatalities while  a total of 1916 people were rescued with injuries against 2099 in 2020 also representing 9% reduction in injuries.
He also said that there was a recorded increase in the total number of people rescued as the Corps rescued 2406 victims of RTC against 2273 people rescued in 2020. he said the statistics represents 6% increase.
The Corps operatives covered 1575 routes, impounded 11060 vehicles representing 18% increase in impoundment, and apprehended 20845 offenders as against 16578 offenders in 2020 representing 26% increase; for committing 24214 offences as against 18392 offences in the same period in 2021 which represents 32% increase.
Given the reason for the decrease recorded in RTC, Kazeem largely attributed the milestone to several coordinated factors, among which are; enhanced visibility, establishment of Station Offices in almost all the 774 Local Government Areas in Nigeria; intensified public enlightenment and sensitization campaigns held nationwide in collaboration with key stakeholders in the transportation sector and beyond; and of course, effective patrol operations.
Speaking on other variables that contributed to the successes recorded within the period the Corps Marshal, Dr. Boboye Oyeyemi, said that the Corps now has been able to put up a wider coverage due to the establishment of more FRSC Commands, Outposts, road side clinics and Zebra points who now feed in reports from different routes that were hitherto not thoroughly covered.
He further stated that the reduction both in crashes during the period under consideration is an indication that the combination of aggressive enforcement and public enlightenment that has been broadened through the establishment of the National Traffic Radio 107.1 FM is yielding results and road users are complying accordingly.
He stressed that the tempo in the operational and advocacy front will be sustained to ensure continuous decrease in number of road crashes, number of persons involved, as well as decrease in the number of persons killed by crashes on our roads.
According to him, “The Corps will keep on advancing steadily towards the realisation of its corporate mandate of creating a safer motoring environment and eradicating RTC on our roads.
This tempo will surely be sustained as all efforts have been adequately put in place to make the roads safer for all”.
It will be recalled that the Corps Marshal had earlier directed that the 2021 Sallah special patrol to cover 45 corridors which include but not limited to Sokoto-Tambuwal-Jega-Birnin Kebbi; Mokwa-Birnin Yero-Zaria; Maiduguri-Biu-Numan-Jalingo-Wukari; Akwanga-Lafiya-Makurdi; Jos-Bauchi-Gombe; Katsina-Kano-Wudil-Dutse-Azare-Potiskum, Kaduna-Saminaka-Jos, Abuja-Kaduna-Kano, Okene-Ogori-Isua-Owo; Makurdi-Otukpo-Obollo Afor-9th Mile; Asaba-Abraka-Ughelli-Warri corridor; Ibadan-Ogere-Sagamu; Sagamu-Mowe-Lagos; Abuja-Lokoja-Okene; Lokoja-Auchi-Benin; Onitsha-Njaba-Owerri-Umuahia, Ibadan-Oyo-Ogbomosho; and Ibadan-Ogere-Shagamu.
The agency also called on the general public to assist the Corps by reporting any form of obstruction or emergency on the road to the spokesperson through the FRSC Toll Free numbers 122 or tune into the National Traffic Radio 107.1FM to report same or any other contravention seen on the road.
The Station can also be reached through its Social Media Handles as follows; WHATSAPP 08052997848, FACEBOOK TRAFFICRADIO 1, TWITTER @TRAFFICRADIO 1, INSTAGRAM TRAFFICRADIO 1. Or Call the following numbers; GLO 08052998090, MTN 09067000015, and SMS on GLO 08052998012 and the FRSC toll free emergency line 122.