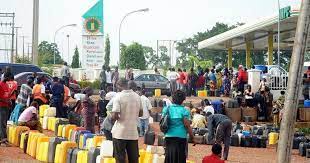 Fuel scarcity, poor harvest occasioned by flooding, and the planned re-designing of Naira Notes, have combined to trigger panic-buying of food items in most states of the Northwest.

Checks by the News Agency of Nigeria (NAN) in Kaduna, Sokoto, Zamfara, Kebbi, Kano and Katsina states, reveals that the rush for the items has resulted in near-daily increase in prices.

This development is unfolding in spite of the fact that the last quarter of every year is the harvest season when agriculture produce are supposed to be cheap.

NAN observes that dealers engage in bulk purchase for the purpose of hoarding in anticipation of hyper- inflation which, from all indications, may likely set in during the next few months, if the current indicators are anything to go by.

Malam Hassan Dankasuwa, a trader in Sokoto, said prices of foodstuffs were increasing on a daily basis, attributing this development to scarcity of commodities in the market.

“Shops in the market that usually supply foodstuffs and other commodities, are half empty.

“The increase in exchange rate of Naira to other foreign currencies, as well as the scarcity of the latter, did not help matters because the largest number of our commodities are purchased from Niger Republic.

“Sometimes, even if you have enough Naira to purchase the needed foreign currency, the traders in Niger Republic are rejecting the Nigerian currency to avoid incurring loses in view of the impending redesigning of the Naira, effective Nov. 15,” he said.

Another trader, Malam Danladi Bello, was of the view that the current hike in prices was abnormal, and that sabotage of government’s laudable efforts at ensuring food security, could not be ruled out.

“We are all aware of how the government at the centre continues to initiate measures to ensure food security and reduce poverty.

“Some people view such commitment as a threat to their business ventures, and therefore, plan to create more hardship,” he alleged.

Bello acknowledged that hike in prices of commodities before and during festive periods as a result of increase in demand was normal, but insisted the current situation was abnormal.

In Katsina State, residents also expressed concern over the astronomical hike in prices of grains, sparking panic-buying by some dealers.

An investigation conducted by NAN in some major grains markets like Dandume, Dayi and Charanchi, indicated that prices of maize, guinea corn, beans, millet, soybeans and rice, were increasing daily.

NAN reports that people are concerned because the abnormal increase is coming at a time when some farmers have just harvested their maize, millet and soybeans, while guinea corn and beans are still in farms in some parts of the state.

Alhaji Haruna Muhammad, a grains dealer, said that although price hike was not a new thing, the timing for the current astronomical increase, was frightening.

“We saw some people in Dandume market buying the grains in large quantity, which is unusual; people are saying that the rush was triggered by the policy of the Central Bank of Nigeria (CBN) to redesign Naira notes.

“These people do not want to take their money to banks, rather, they prefer to engage in panic buying of grains and sell it at higher cost later,” he said.

On his part, Malam Aliyu Umar attributed the situation to less quantity of crops being harvested, particularly maize, because of the high cost of fertiliser.

“They (dealers) want to buy the produce, hoard same and bring them out for sale at higher price in future,” he said.

Malam Aliyu Muhammad, a rice dealer, said that he heard farmers claiming that flood had affected several hectares of rice farm, noting that last year around this period, the cost was about half of its present price.

In Kaduna, prices of food items have continued to hit rooftops as the Yuletide season draws closer.

Malam Abubakar Muhammad, a seller of food items, told NAN that 50kg bag of local rice now costs N33,000, as against its previous price of N28,000.

NAN checks indicated that the situation is the same in Kebbi as prices of some foodstuffs and other essential items have continued to increase in spite of the ongoing harvest of such crops in the state.

A survey carried out by NAN indicated that prices of staple foods such as rice, maize, wheat and gari, had increased by between 10 and 15 per cent in a span of two months.

Chairman of Foodstuff and other Essential Goods’ Association in Kebbi , Alhaji Umaru Dogo, attributed the increase to the current unstable market situation occasioned by continuous fall in the value of Naira.

Also in Kano and Zamfara States, prices of some staple foods have continued to increase, placing residents at the receiving end.

Residents who spoke to NAN on the situation blamed this development on scarcity of fuel and poor harvest of agriculture produce recorded this year, as well as the high cost of farm inputs like fertiliser and chemicals.

Dealers in food items and customers said prices had shot up by between 10 per cent and 50 per cent, making things difficult for both sellers and buyers alike.

They, therefore, appealed to the Federal and State governments to work out ways of regulating prices of food items, adding that many breadwinners were finding it difficult to live up to their expectations in the family. (NAN)