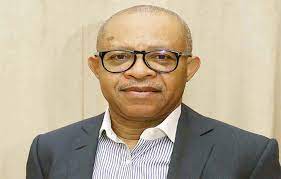 Okwuosa, said that local firms are profoundly working closely with investors and government to ensure the success of the initiative to derive more revenue for the federation account and end the pollution of the environment.

Speaking after being conferred with CON by the president, Muhammadu Buhari, he said the honour comes with more expectations having been recognized for his enormous contributions in enlarging the economy through delivery of critical infrastructural projects.

Okwuosa, further added that Oilserve has been a critical partner in the construction of the 40-inch x 614km Ajaokuta-Kaduna-Kano (AKK) Gas Pipeline project.

He said that the completion the project will provide gas for generation of power and feedstock for gas-based industries, and also facilitate the revival of declining industries and the development of new ones along transit towns in Kogi State, Abuja (FCT), Niger State, Kaduna State and Kano State.

He said, “Oilserve has achieved a lot in the country over the past 25 year of its operations. The reason is that we deploy experienced folks and determination to make impressions first in the oil and gas industry and then in other sectors are areas of the entire country.

Yes, we have been involved in many projects; and we have been able to deliver many difficult projects: difficult in technical, difficult in environment and difficult sometimes because of the politics of what we do as human beings and organizations, and also difficult due to issues of security.”

Due to government’s local content initiative, he said, Oilserv has built several pipelines in difficult terrains: some on land, some in swamps and some on mountains and some across rivers and expressed delight that a Nigerian company can develop the necessary skill sets and capacity that would enable development of oil and gas facilities of world class standards.

Speaking further, he said Opportunities will always be there as we move forward, because the economy will continue to grow. And as we grow the economy, the principle factors of economic activity will emerge. And in Nigeria today and most parts of the world, what is predominant in the energy field is gas. Of course oil remains important and will continue to generate its own values. I am sure that you that as of today that the bulk of foreign exchange and revenues that drive the Nigerian economy comes from oil and gas.”

Speaking on gas initiatives, Okwuosa, said, Gas is such an inventory riser that for you to produce, distribute and utilize gas you have to deliberately engineer and build the right infrastructure. You cannot store away gas the way we do oil. You have to build infrastructure that would match production with transportation and utilization. That is why you have pipelines; that is why you have LNG and CNG technologies for virtual transportation of gas. These take gas to utilization.”

He however, lamented bottlenecks in the utilization of gas energy in Nigeria which he said has to do with dearth of pipelines infrastructure to distribute and of course the LNG for international sales and delivery.

He said however that the Trans-Saharan Gas Pipeline is actually one of the two major international pipelines that are being envisaged. The pipeline is the one that will take off from Kano and go through Niger Republic and Algeria and end up in Europe.

The project that is actually hot now and is on board in terms of process is the Nigeria-Morocco which will run offshore West Africa to North Africa and will go all the way from Niger Delta to offshore Lagos.