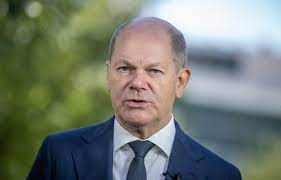 Germany will not accept the results of the annexation votes organised by Moscow in the Russian-occupied regions of Ukraine, German Chancellor Olaf Scholz told Ukrainian President Volodymyr Zelenskyy in a phone call.

“Germany will never recognize the results of the sham referendums” in the regions of Donetsk, Luhansk, Kherson and Zaporizhzhia that purported to show majorities in favour of being absorbed into Russia, Scholz told Zelenskyy, according to the chancellor’s spokesman Steffen Hebestreit.

Scholz also said Germany’s financial, political and humanitarian support for Ukraine would not waver and it would continue to back Ukraine in defending its sovereignty and territorial integrity, including weapons deliveries.

“The prime minister made clear that the UK would never recognize Russian attempts to annex sovereign territory. She reiterated that Ukraine could depend on the UK’s support until President Putin was defeated,” the spokesperson said.

“We call on members of the international community not to recognize the legitimacy of these pseudo-referendums and their ‘results’, which cannot in any way reflect the will of the people of these regions, who were often forcibly coerced into voting,” the ministry said in a statement.