Global Electric Battery Market To Grow Over $95 Billion By 2028 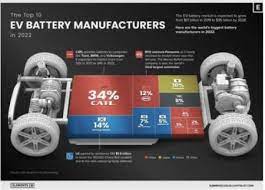 The global electric vehicle (EV) battery market has been predicted to take a major leap from $17 billion to more than $95 billion between 2019 and 2028.

With increasing demand to decarbonize the transportation sector, companies producing the batteries that power EVs have seen substantial momentum.

Visual Capitalist’s Bruno Venditti and Sabrina Lam have updated their previous infographic to show the world’s biggest battery manufacturers in 2022.

Despite efforts from the United States and Europe to increase the domestic production of batteries, the market is still dominated by Asian suppliers.

The top 10 producers are all Asian companies.

Currently, Chinese companies make up 56 per cent of the EV battery market, followed by Korean companies 26 per cent and Japanese manufacturers 10 per cent.

One-third of the world’s EV batteries come from the Chinese company.

BYD took the third spot from Panasonic as it nearly doubled its market share over the last year. The Warren Buffett-backed company is the world’s third-largest automaker by market cap, but it also produces batteries sold in markets around the world. Recent safe figures point to BYD overtaking LG Energy Solution in market share the coming months or years.

Electric vehicles are here to stay, while internal combustion engine (ICE) vehicles are set to fade away in the coming decades.

Recently, General Motors announced that it aims to stop selling ICE vehicles by 2035, while Audi plans to stop producing such models by 2033.

Besides EVs, battery technology is essential for the energy transition, providing storage capacity for intermittent solar and wind generation.

As battery makers work to supply the EV transition’s increasing demand and improve energy density in their products, we can expect more interesting developments within this industry.