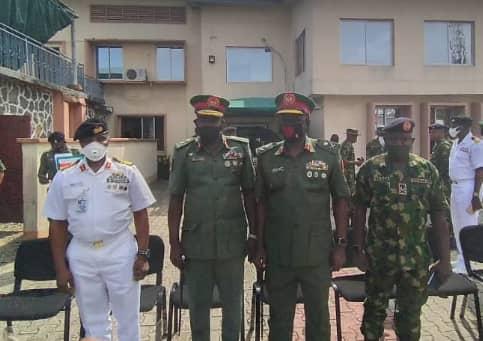 The GOC made the commendation while on a working visit within his Area of Responsibility (AOR) in Ogun State.

Major General Fejokwu said he was delighted with the ongoing expansion in the defence factory which is a sign that something greater is in the offing. He was optimistic that with the state of the expansion and transformation in infrastructure, equipment and general facilities at Proforce Limited, the Company would soon be able to provide more than the basic needs of the military.

He stated that part of the reason for the visit was to collaborate with Perforce on how the 81 Division could harness the benefit of having the factory within the Division AOR. He informed the Proforce GMD that some of the operational vehicle that were beyond economic repair would be backloaded to the factory for repairs.

The GOC and members of his entourage were briefed with a presentation on proforce Limited and Proforce Intelligence. The visiting team was also conducted round the transformed factories and some production lines where the GOC inspected some products and materials produced by Proforce Limited. He disclosed that with the level of progress of work and the zealousness of the staff of the Company, he would continue to be an advocate of Proforce Limited.

Responding the GMD Proforce Limited Engineer Ade Ogundeyin expressed his delight and appreciation to the GOC for finding time to visit despite his tight schedules. He stated that the NA and proforce has been working partners for some time now and that the NA is part of Proforce. He noted that with the ongoing relationship between the 2 parties, the Boko Haram Terrorist activities would soon come to an end. He disclosed that only Africa can solve Africa’s problems, hence the need for commitment by various stake holders. The GMD used the occasion to thank the NA for her patronage which has brought Proforce to the limelight of the international community.

Highlights of the visit included the presentation on Proforce Limited, guided tour round the factory and interactive session. Others were group photograph and exchange of souvenirs