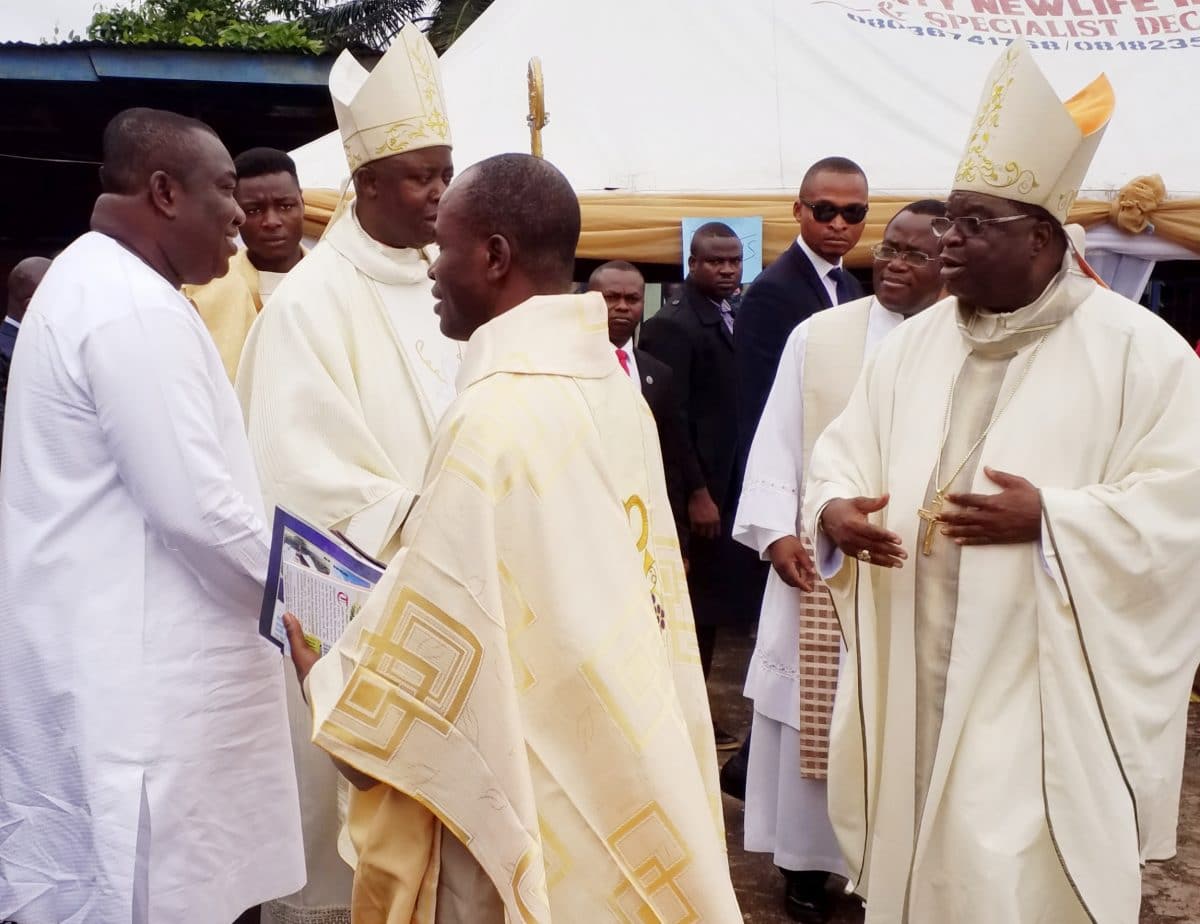 Governor Ifeanyi Ugwuanyi of Enugu State on Tuesday, joined Bishop Callistus Onaga of the Catholic Diocese of Enugu and other members of the clergy to bid the late Rev. Fr. Paul Offu farewell as he was laid to rest at the Holy Ghost Cathedral, Enugu, after a burial Mass.

Gov. Ugwuanyi had immediately after the unfortunate incident summoned an emergency meeting with all the heads of security agencies in the state, and other relevant stakeholders, where they condemned the dastardly act and took decisive measures with the aim of apprehending the culprits and enhancing the security of the state. Two of the suspected killers of the priest have been arrested.

Rising from the meeting, the governor, security agencies, religious leaders and other stakeholders pledged to fish out culprits and agreed on air surveillance of the affected areas, review of state’s security architecture, ban on illegal possession of arms, engagement of the services of Forest Guards and strengthening of the Neighbourhood Watch groups in the state, among others.

In furtherance of the above, the governor made repeated visits to identified thick forests along Enugu-Port Harcourt Expressway in Awgu Local Government, which served as hideouts for kidnappers and other criminal elements, ordering an intensive clearing of bushes around the areas.

Gov. Ugwuanyi also paid unscheduled visits, on several occasions, to Agbudu Community in Awgu LGA, security checkpoints along Four Corner-Ozalla-Udi road and Udi forest, where he had interactions with the policemen on duty and some villagers, respectively, among other interventions.

Speaking at late Rev. Fr. Offu’s Burial Mass, Bishop Onaga, who prayed for the repose of his soul and the fortitude for members of his family to bear the irreparable loss, appreciated Gov. Ugwuanyi for the efforts his administration has made so far to enhance the security architecture of the state.

The bishop applauded the governor for the involvement of clerics in the Neighbourhood Watch in the state, saying: “Your Excellency, thank you so much. You are a father. We are praying for you; you are our own. We shall continue to work with you”.

Describing the security challenges as a national issue, Bishop Onaga maintained that “everybody should be involved” adding that “Priests will use their spiritual power and influence to control them”.

In his oration, Rev. Fr. Sylvester Nwodo, who described late Fr. Offu as a cheerful, gentle and peace-loving priest, also expressed the satisfaction of the church towards the measures being put in place by Gov. Ugwuanyi’s administration to strengthen the security of the state.

Rev. Fr. Nwodo also commended the ongoing recruitment of 1,700 Forest Guards and told the governor that “you have done well. We want you to do more, to see them work”, stressing: “We love you and will continue to love you”.