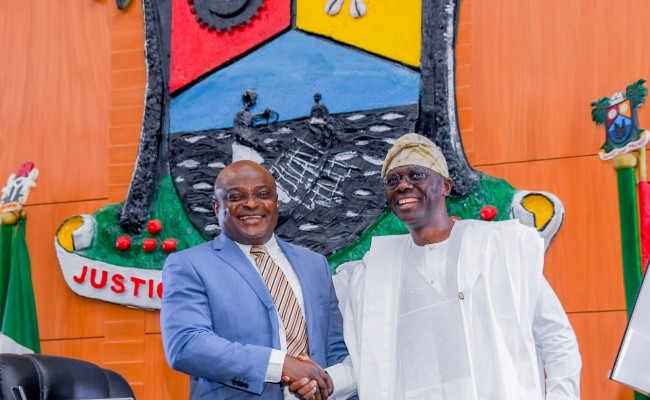 Sanwo-Olu extolled the good virtues of the Speaker, saying Obasa has recorded significant strides in his public service as the longest-serving lawmaker in the Lagos State House of Assembly.

The Governor in a statement issued on Thursday by his Chief Press Secretary, Mr. Gboyega Akosile, praised Obasa for his contribution towards his Constituency, Agege I, the State Assembly, Lagos State, and Nigeria in general, especially during his tenure as Chairman, Conference of Speakers of the State Legislatures of Nigeria.

Governor Sanwo-Olu, who described Obasa, a member of the Lagos APC apex leadership body, Governance Advisory Council (GAC), as a committed and trusted partner in the ‘Greater Lagos’ agenda, added that the Speaker is passionate about the growth and development of Lagos State, saying that is why there is synergy between the executive and legislative arms of government.

He said: “On behalf of my wife, Ibijoke, the Lagos State Government, leaders and members of the ruling All Progressives Congress (APC), and the good people of Lagos State, I join millions of well-wishers, colleagues, associates, and family members to congratulate the Speaker of Lagos State House of Assembly, Rt. Hon. Mudashiru Obasa on his Golden jubilee celebration.

“You (Obasa) are a loyal and committed member of the progressive family in Lagos State, especially in Agege Local Government area where you served passionately as Councilor on the platform of Alliance for Democracy (AD) between 1999 and 2002 before being elected into the Lagos State House of Assembly in 2003 and re-elected four consecutive times to become the longest serving lawmaker in Lagos State House of Assembly.

“You are an outstanding politician worthy of emulation and commendation because of the role you have been playing as leader of the Lagos State House of Assembly. As Speaker, you have discharged your duties with utmost professionalism, commitment, competence, and dedication for a cordial relationship between the legislature and executive for the progress of our dear Lagos State.

“As you attain this Golden age of wisdom, I wish you more fulfilling years. I pray that God will grant you the grace, long life, and sound health to continue to direct the affairs of the Lagos State House of Assembly and render more service to humanity.”