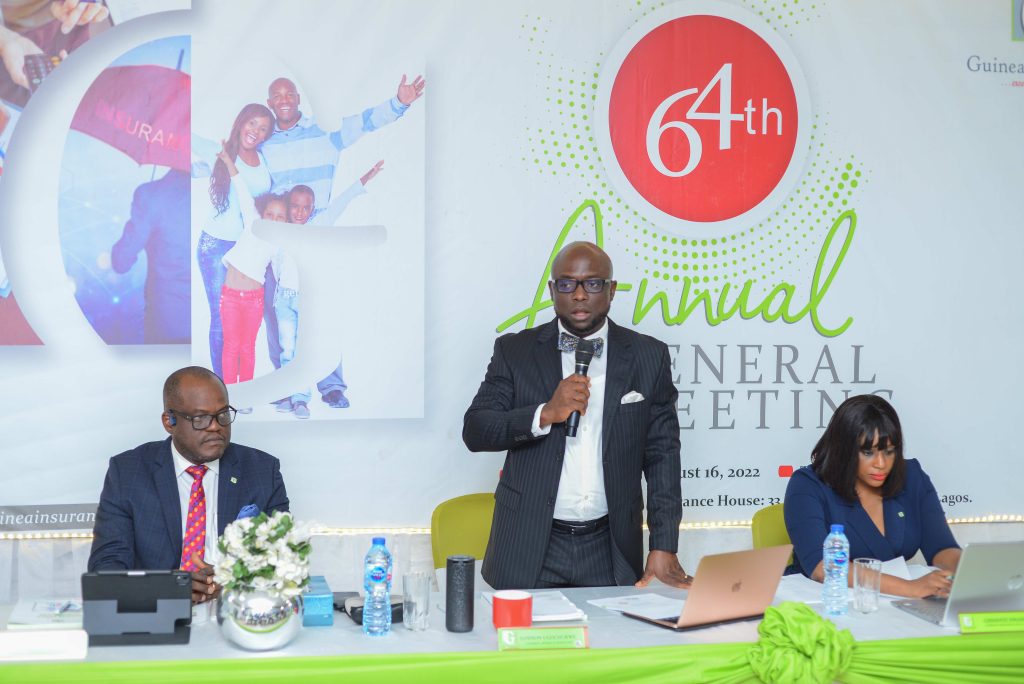 Guinea Insurance PLC., has disclosed a 24.8 per cent growth in its Gross Premium Written to N1.35 billion higher than N1.08 billion recorded in 2020.

The Net Claims Expenses in 2021 was N0.48 billion which is a 69.1 per cent improvement over the sum of N1.55 billion recorded in 2020, due to efficient claims management.

Chairman of the Board of Directors, Mr. Ugochukwu Godson, speaking at the Company’s 64th Annual General Meeting (AGM) held recently in Lagos, said despite the many difficulties and operational challenges encountered throughout the year, the company was able to weather the storm and continue on the path of growth.

The AGM which was hybrid had a group of in-person participants connecting with remote participants to afford all stakeholders the same participatory rights as with a physical meeting.

According to the statement by the Team Lead, Corporate Communications, Hanson Ufot, the AGM, presided over by the board Chairman, conducted both ordinary and special business, obtained necessary shareholder approvals, and, as part of the ordinary business, presented the audited financial statements for the year ending December 31, 2021, along with the reports of the directors and auditors, to shareholders.

The board Chairman, Godson Ugochukwu, who addressed the shareholders also reaffirmed the board’s and management’s commitment to strategically and effectively position the company as an investor’s delight while also propelling it to a profitable height for the financial well-being of its shareholders.

Speaking on behalf of the shareholders, Boniface Okezie, Chairman of the Progressive Shareholders Association of Nigeria, noted that insurance relies on trust and the timely payment of claims.

He praised the company for its efforts in this area as well as for maintaining its customary attitude of accountability, responsiveness, and commitment to the welfare of policyholders at all times.

He recommended deliberate and purposeful actions toward taking the company to glorious times but expressed concerns over the numerous mitigating factors impeding the projected upward mobility of the company to profitability.

Godson expressed his opinion in this regard, stating that the company was already on the comeback trail to profitability as funds had been injected to strengthen its financial base and increase its capacity for transacting large-scale business deals.

In addition, Guinea Insurance’s Managing Director, and Chief Executive Officer, Ademola Abidogun, in his remark, urged the company’s shareholders to see the positive aspects of the upcoming changes.

“With the injection of additional capital, our company is now well positioned to attract and transact larger portions of new businesses. It is undeniable that consumers today are shifting and favoring simplicity more than ever before; as a result, our investment roadmap in technology and digital transformation is motivated by the need to give customers the freedom to purchase reliable insurance products without any geographical restrictions,” he asserted.

He continued by saying that the company had made an effort to keep management costs to a minimum, obtain regulatory approval for the underwriting of agricultural insurance, and reduced operating expenses.

The company’s shareholders overwhelmingly agreed to the company’s prayers and approved the re-election of the following directors: Godson Ugochukwu, Alhaji Hassan Dantata, and Simon Bolaji. In a similar spirit, the shareholders agreed to increase Guinea Insurance’s issued and allocated share capital to 7,942,800,000 ordinary shares of 50 Kobo each, effective August 16, 2022.

Insurance Firms From Nigeria, Others To Spring Into Global Relevance