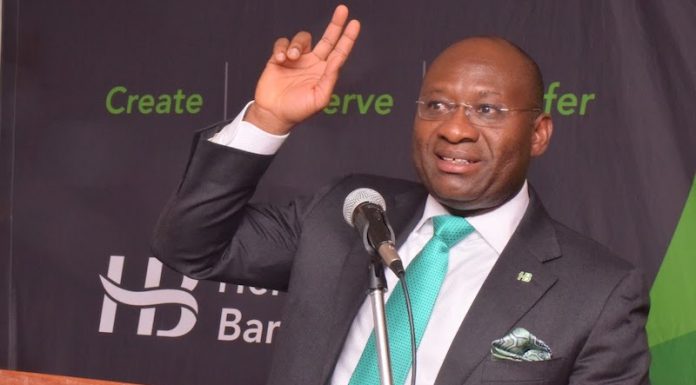 The Managing Director/CEO, of Heritage Bank Limited, Mr Ifie Sekibo, has advised the federal government to urgently resolve the identity management system challenges in the country to empower commercial lenders to extend credit to Small and Medium Enterprises (SMEs).

Speaking at the Finance Correspondents Association of Nigeria’s (FICAN) 30th-anniversary conference and awards with the theme: “Financing infrastructure & SMEs for inclusive growth in the post-COVID-19 economy”, which was held in Lagos at the weekend, noted that until the country developed an identity management system that delivers value to the citizenry, SMEs will continue to grapple with financing challenges.

Sekibo, who was represented by Olusegun Akanji, Divisional Head, Strategy and Business Solutions explained, “Though the banking industry has financed a lot of SMEs in terms of count, it is the sector that has the largest numbers of bad loans and frauds in terms of count.”

According to him, the government needs to also put in place enabling policies that will support the private sector to complement the government’s efforts at bridging the country’s infrastructure deficit.

He added that the government alone cannot solve the country’s infrastructure challenges, noting that it is the private sector that will deliver the solution.

“We need the global private sector intervention to help us achieve a vision of infrastructural development,” Sekibo also said.

More so, the Managing Director/CEO, Fidelity Bank Plc, Mrs Nneka Onyeali-Ikpe, who was represented by Osaigbovo Omorogbe, Divisional Head, SME Banking, said though banks are willing to support SMEs, many of them lack capacity.

He argued that, “Commercial banks are not running away from supporting SMEs but joining hands with the government and other stakeholders to refinance all of what you see around infrastructure which is critical to the economy.

“I think the questions that should be answered for every proposal are, ‘Is it bankable?  If you are going into this, what structure should be in place to ensure that the funds we are going to put in will be recovered back because we have stakeholders and investors who are also looking towards a good result’?”

The former Acting Managing Director, Bank of Industry (BOI), Dr. Waheed Olagunju, called on the government and the private sector to boost the capacity of the SMEs sector.

According to him, “We need to build the capacity of our people; the government and the organised private sector have a role to play.”

He added that there must be a way of helping the SMEs as the engine of growth in the economy, pointing out that the demand side and the absorptive capacity of the SME must be looked into.

“I believe that the government and private sector development partnership will help. We need to work on the ecosystem looking at what other countries have done: they invested in industrial parks and technology as a short-term measure”.

He said the world is awash with investable funds of more than $17 trillion, stressing that Nigeria is one of the best investment environments in the world.

“Investors are looking for where to invest and return-on-investment in Nigeria, prior to COVID-19, was one of the highest in the world. According to UN statistics, Nigeria was ranked between 21 and 35 per cent on Return-on-Investment, Nigeria has the highest foreign direct investment in Africa. The world wants to do business with Nigeria,” he said.

In addition, Mr Bola Koko, Managing Director of FMDQ Group, represented by Yomi Osinubi, said, “If you want SMEs to get the best benefits of infrastructure development in the country, the CBN Governor mentioned the largest areas to focus which is energy;  the second-largest is the logistics – movements of cargo around the country,” he said.