How Kaduna Airport Attack Happened And Why Air Passengers Are Worried 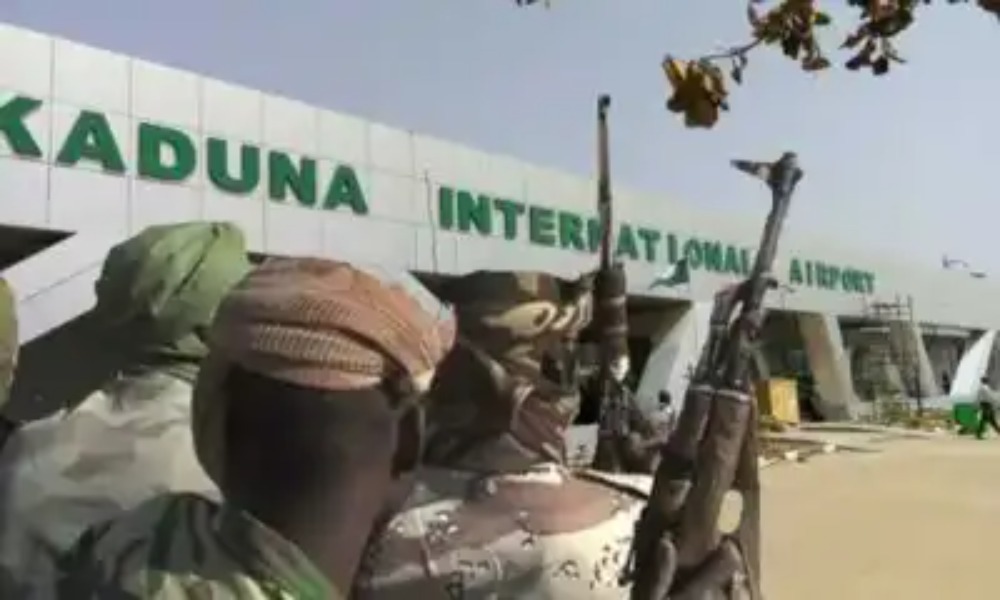 Air traveling passengers are beginning to question the safety of Nigerian airports after a botched bandits attack that left one dead in Kaduna.

According to monitored reports, many Nigerian citizens and security experts are raising concerns that the country may be overturn by terrorists after some 200 gunmen Saturday invaded an airport in Kaduna State and killed an official.

The attack followed days of violent raids in the state with dozens of people killed.

Saturday’s attack was the latest in a spate of violence that has hit the northwestern Nigerian state for days.

The Federal Airports Authority of Nigeria, FAAN, confirmed that armed terrorists invaded ‘runway five’ of the airport from a nearby forest and opened fire, killing one official and causing flight delays.

Kaduna State Commissioner of Internal Security and Home Affairs, Samuel Aruwan, said the military deployed to the airport immediately to repel the attack before it escalated.

Armed gangs have been terrorizing the state for years. In the last few weeks, dozens of people were reported killed in series of attacks on local communities southward of the state where sectarian violence has persisted.

Jakes Tudu, an activist from southern Kaduna, says the recent development is worrying.

“I’m scared because it is actually overwhelming. These guys are actually doing the unimaginable, like things you could not believe or imagine,” Tudu said. “Coming out in broad daylight to attack the airport is really crazy and scary.”

Saturday’s attack also occurred as Nigerian President and top officials of his ruling political party, All Progressive Congress (APC) hosted thousands of people in Abuja to mark the party’s conference ahead of next year’s polls, sparking criticism.

The critics say the attacks highlighted major failures on election promises made to Nigerians.

“Being a state that has the Nigerian defense academy, we have the police college, name it, Kaduna used to be a fortified ground,” Tudu said. “But now today we have these guys moving around in Kaduna kidnapping people.”

But authorities have been struggling to curb frequent attacks by armed gangs who rose to prominence for the mass kidnappings of students and the killings of local residents since late 2020.

Authorities say the military operations against gangs have been successful and that hundreds have been killed in recent months the latest being the killing of more than 200 armed gangs, known locally as ‘bandits’ in central Niger state earlier this month.

But security analyst Senator Iroegbu says while the military appears to be making some progress there’s still reason to be worried.

“Government’s claim to be winning the war I’m sure it’s a way of motivation,” Iroegbu said. “Yes there’s some progress but evidence like this shows that the war has not been won.”

Aids groups say in recent years, that attacks like the one in southern Kaduna have sacked communities and displaced at least 30,000 people from their homes.

The attack on Kaduna City airport was another escalation from armed criminal gangs, known locally as bandits, who are blamed for rising violence and mass kidnappings in northwest Nigeria.

“Troops stationed within and around the airport responded and repelled the attackers,” he said.

“The bandits, unfortunately, shot and killed a staff member stationed at the perimeter fence who raised alarm on sighting them.”

A senior security source said the gunmen had made several attempts to attack the airport from midnight, but security forces repelled them.

The incident led to the disruption of flights. Passengers kept away from the airport as news of the attack filtered across the city, the security source said.

“Security personnel have been doing their best in preventing the bandits from gaining access into the airport since last night,” the security source said.

“The terrorists either want to storm the staff quarters and abduct people as they did in two previous cases or they aim to kidnap passengers and staff in their airport.”

Northwest and central Nigeria have long been terrorised by criminal gangs who raid villages to loot and kidnap residents en masse for ransom. But attacks have intensified.

Gunmen killed 34 people last weekend in Kaduna State, including two soldiers, with more than 200 homes also destroyed in an attack on four villages in the Kaura local government district.

This is the latest violence blamed on gangs known locally as “bandits” who plague the northwest and central parts of Nigeria where they loot, kidnap and kill residents.

“Soldiers stationed in and around the airport returned fire and repelled the attackers,” Aruwan said.

“The bandits unfortunately shot and killed an airport employee who raised the alarm when he saw them,” he added.

Flights, which were interrupted during the attack, resumed shortly afterwards, according to the authorities. Domestic flights connect Kaduna to the commercial capital, Lagos.

“Security personnel have done their utmost to prevent the bandits from entering the airport since last night,” a security source said, estimating that they were seeking to “kidnap” either airport staff or passengers.