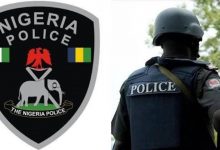 Imo Police Command says it arrested three suspected traffickers of a one-year-old and  recovered a human skull, arms and ammunition in the process.

The Commissioner of Police, CP Rabiu Husseini, disclosed this while parading the suspects and displaying the exhibits in Owerri on Thursday.

Husseini also said that 11 suspected armed robbers and kidnappers were arrested in different parts of the state.

He added that other exhibits such as nine motorcycles, four vehicles, three pump action guns, two locally-made pistols and 17 live cartridges were recovered.

Also, a cash sum of N1,092,000 was recovered from the kidnappers being ransom paid by victims of kidnapping.

He further said that investigations are ongoing to unravel more details about the mode of operation of the suspects, adding that confidential information would be kept with the police for security reasons.

“In the course of interrogation, it was discovered that they belong to an organised crime syndicate, whose modus operandi includes going to banks, pretending to be customers who have come for banking transactions.

“They spy on genuine bank customers who are withdrawing huge sums of money, and as the customer is leaving the bank, they will use their phone and give information about the person to their members waiting outside the bank premises on motorcycle or vehicle.

“As soon as the victim comes out, they will trail him to his destination and snatch the money from him. Based on this revelation, on 21/12/2021 at about 1400hrs, the command’s tactical team mobilized and laid ambush on the suspects,” he said.

He advised Imo residents to get used to their surroundings so as to detect strange people; to install CCTV cameras at home or office if possible so as to monitor movement of people around.

He also harped on the need for residents to have Police and other security agency emergency numbers at all times, to speak with caution in public places and to avoid giving out personal information to strangers.

He thanked his officers and men for their doggedness as well as the state governor, Sen. Hope Uzodimma, for his unalloyed support for the Command. (NAN)