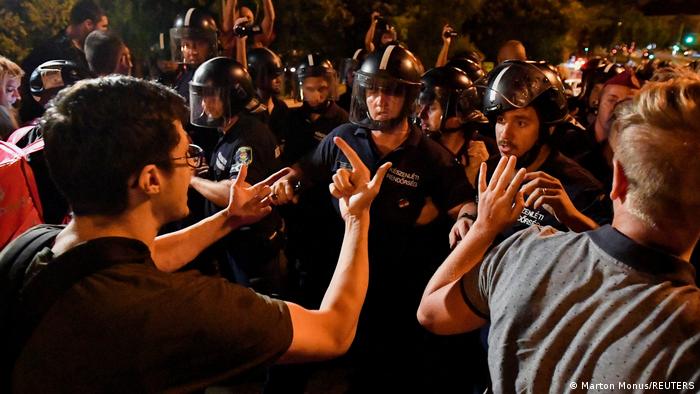 At least 1,000 people took to the streets to protest against a new law that curtails tax relief for scores of small businesses. They come at a time when PM Viktor Orban is facing some of his toughest challenges yet.

At least 1,000 Hungarians  took to the streets Saturday night to protest against a new law that raises taxes for scores of small firms.

The protest follows a series of smaller demonstrations that have taken place across Hungary, including in the capital city, Budapest, throughout the week.

Earlier this week, protesters blocked a bridge in Budapest as parliament discussed the tax reform bill. The legislation, which was passed despite the protests, scales back a tax scheme for small businesses, reports AP.

The law stands to affect self-employed people and freelancers since they relied on the tax relief scheme for nearly 20 years.

After the bill was passed, Prime Minister Viktor Orban’s right-wing Fidesz party on Wednesday also curtailed a cap on utility prices for higher-usage households amid rising electricity and gas prices.

Orban is facing his toughest challenge yet since taking power in 2010.

Inflation is at its highest in two decades and Hungary’s currency, the forint, hit record lows against the euro and the US dollar after Russia invaded Ukraine.

Hungary stands to receive billions of dollars in grants under the European Union’s COVID response fund, but Brussels is yet to release those funds over concerns of democratic standards and corruption.

As one protester at Saturday’s rally told Reuters news agency: “I just want to be able to live a normal life, not having to pinch pennies at the end of every month… this is really not sustainable.”

While the protests highlight that people are angry about the current economic situation in the country, the relatively small turnout shows that anti-government sentiment is lacking even in Budapest, where the opposition alliance had the strongest showing in April’s election.

Saturday’s protest was called by independent conservative leader, Peter Marki-Zay, who was the first serious opposition challenger to Orban’s leadership in April’s election.

Orban, a nationalist prime minister, is one of Europe’s longest-serving leaders. He has emerged as a vocal supporter of anti-immigration policies and an opponent of tough energy sanctions against Moscow.