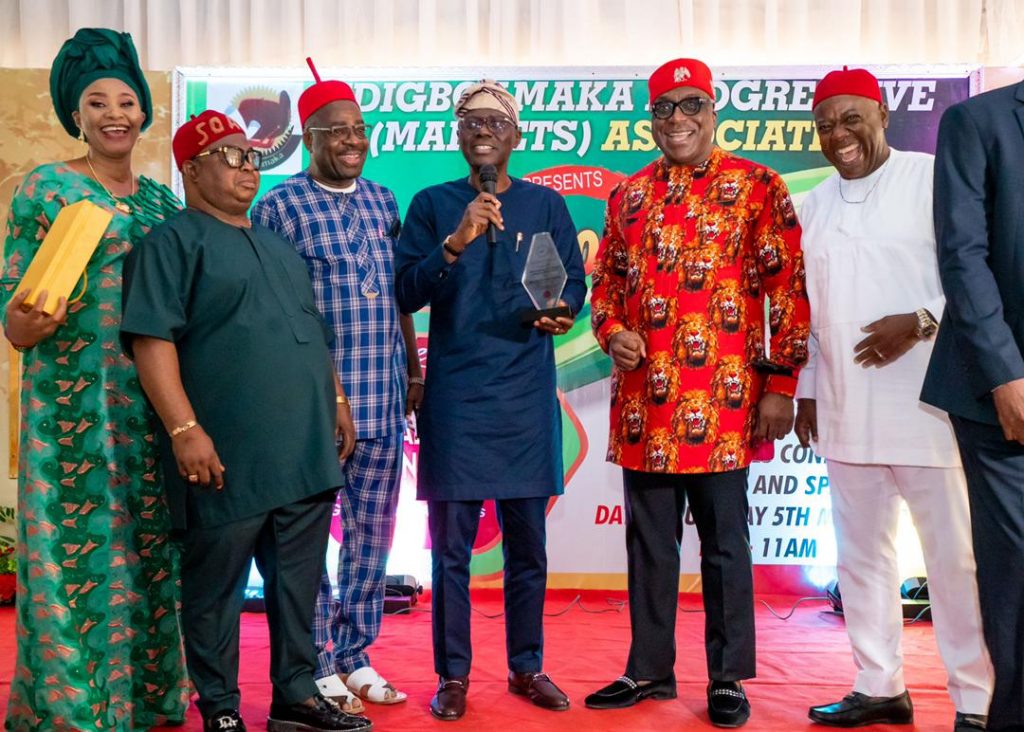 An amalgamation of Igbo traders across 58 major markets in Lagos State, on Thursday, passed a vote of confidence on the leadership of Governor Babajide Sanwo-Olu, endorsing the Governor’s second term bid.

The traders, under the aegis of Ndigboamaka Progressive Markets Association, said although Sanwo-Olu had not formally informed them of his second term bid, they unanimously support the Governor’s re-election in appreciation of the State Government’s business policies and infrastructure development which support their trades.

Sanwo-Olu got the endorsement at the 2022 All Markets Conference organised by the association in Amuwo Odofin area of the State.

President of Ohanaeze Ndi Igbo in Lagos, Chief Solomon Ogbonna, led his chiefs to the event also attended by market leaders and traders from all the 58 Igbo markets in Lagos.

In a passionate address to the Governor, Secretary General of Ndigboamaka traders’ association, Comrade Chinedu Ukatu, said: “Mr. Governor, you have not formally told us whether you are seeking re-election or not, but I want to tell you that all the market leaders seated here today are yearning for a second term for you.

“Anytime you walk, we will walk with you. I have been directed by all market leaders under the auspices of Ndigboamaka Progressive Markets Association in all the 58 dealer markets, to tell you that we have endorsed you for second term to show appreciation for your friendly policy and infrastructure projects initiated to help our businesse

Sanwo-Olu described the endorsement as a mark of general acceptance of his administration’s efforts to deliver ‘Greater Lagos’ and strengthen the culture of good governance for which the State is reputed.

The support, he said, comes with an assurance of more development programmes to be expected from his administration.

The Governor promised not to take the Ndigbo’s support for granted, while re-assuring them of the State Government’s continued collaboration to create an enabling environment for businesses to thrive.

Sanwo-Olu said Igbo traders remained prominent players in the economic growth of the State, noting that Lagos’ development narrative would not be complete without the mention of entrepreneurial spirit of the Igbo.

He said: “This is another moment for our Government to recognise our Ndigbo brothers and sisters for their commitment to the growth and development of Lagos. Certainly, Ndigbo traders have been part of the good story of Lagos; your entrepreneurial spirit is second to none and the Igbo enterprising spirit has become a case study in Harvard, which is the biggest business school in the world.

“Contribution to the livelihood of your host communities have been acknowledged and in Lagos, we have created together an economy that has continued to grow and position our nation as the biggest economy in Africa. Trading is a veritable link between producers and consumers, which is the area the Ndigbo traders have tirelessly worked to define the growth trajectory of our dear State. I’m happy that our modest interventions for more growth in this area are visible and being recognised.”

Sanwo-Olu pledged that his administration would continue to protect the business interests of the Igbo people, while promising to make the State habitable for non-indigenes that abide by the laws of the State.

He said his administration would continue to seek peaceful co-existence among all ethnic nationalities cohabiting in Lagos, stressing that the ethnic groups must see themselves as different sides of a coin that shouldn’t have anything against one another.

He said: “We have to come to the understanding that we all have different roles to play in keeping Lagos safe for business and living. We are all important stakeholders in Lagos project, whether it is Government, traders and private sector individual. We must continue to foster peace and harmony through an avenue like this conference, using the interaction to make Lagos better for everyone of us.

Represented by the Ministry’s Permanent Secretary, Mrs. Kikelomo Sanyaolu, the Commissioner said markets management in Lagos had been structured with policies to engender economic groups.

“April last year, we inaugurated a 21-member Lagos State Market Advisory Council (LASMAC) with the responsibility of managing the affairs of markets in the State, in line with the international best practices, thus helping to acquaint the traders and other stakeholders with the policies of this administration. The Council took cognizance of the various socio-cultural settings in markets across the State and Mr. Governor ensured that various communities were brought on board to represent different socio-cultural interests and affinities,” the Commissioner said.

Frontline businessman and chairman of United Nigeria Airlines, Dr. Obiora Okonkwo, said the conference offered opportunities to engage policymakers and political administrators in charge of the commerce to lobby for regulatory actions that would further ease business activities.

Okonkwo specifically charged traders to cooperate with the Government and regulatory agencies in exposing counterfeiters in their markets.

President of Ndigboamaka Progressive Markets Association, Chief Jude Okeke, made a case for trade incentives for marketers, stressing that the economy would not flourish without the contribution of informal traders.

“This conference will create an opportunity to strengthen cooperation and collaboration between tradesmen and government agencies to forge a common front in promoting growth of the economy,” Okeke said.