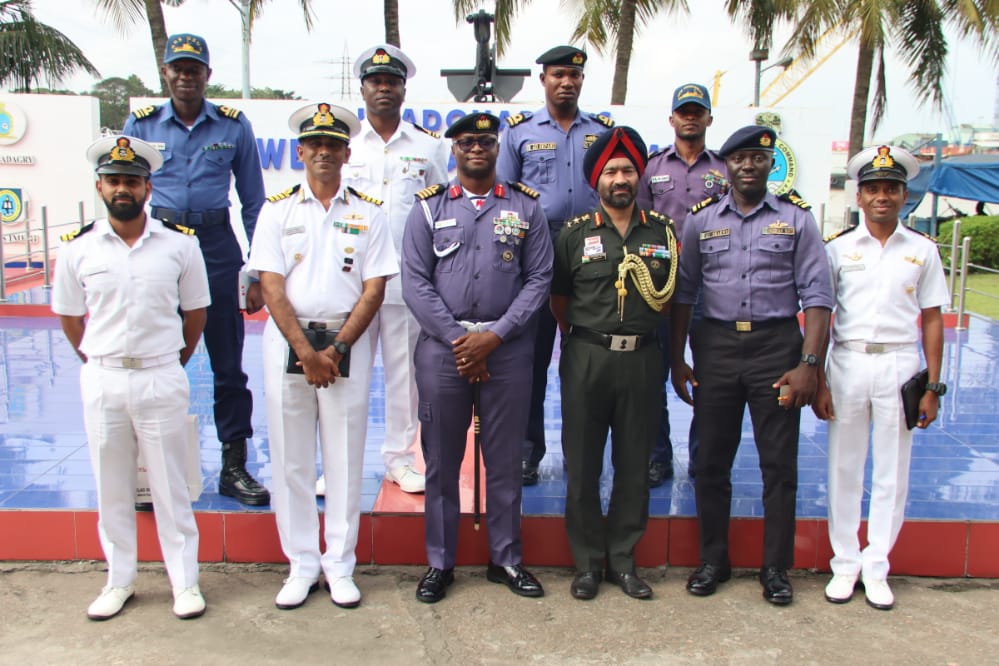 As part of ongoing efforts to maintain security in the Gulf of Guinea, Nigeria and India are strengthening their bilateral ties as the Indian Naval Ship Tarkash arrives in Lagos port for a combined maritime exercise with the Nigerian Navy (GoG).

The delegation was led by the Indian Defence Attache, Colonel Romi Singh Legha.

Speaking on their visit, Col. Legha  said that it was the first time that they would be engaged in an operational exercise, unlike when it was just a port call.

He expressed confidence that the planned exercise would further boost  security in the Gulf of Guinea.

“This visit by Tarkash – there is an operational deployment which we are having for the very first time; we have usually had port calls. But this is the first time we are having some sort of operational deployment as well as an exercise, which has been planned along with the Nigerian Navy. I am sure it would go a long way in ensuring the security of the Gulf of Guinea.”

The Defence Attache described efforts by the Nigerian Navy and that of the Nigerian Maritime Administration and Safety Agency (NIMASA) as ‘phenomenal’ in the fight against piracy.

“We really look forward to actually see the scourge totally be removed from this area. And I am sure the Nigerian Navy, being professional in this area, will achieve this feat in no time.”

On his part, Captain Samuel, spoke on the gains of the training exercise that would also take place, while he expressed hope that the menace of piracy would surely reduce following the planned sea exercises.

“The relationship between Nigeria and India has come a long way.

“Our trade volumes are high; Nigeria is one of the largest trade partners of India in Africa. And India has interest in the Gulf of Guinea because they are one of the beneficiaries of our oil.

He added that: “India has also assisted the Nigerian Navy in the training of our officers. As we speak now, some of our officers in hydro school, navigation school, are all in India in their various schools undergoing training.”

Admiral Kaoje recalled that the same Indian Navy Ship Tarkash visited Nigeria in 2019, and is here again as its routine visit.

He said the Nigerian Navy‘s sustained efforts and collaborations at tackling piracy, paid off as Nigeria was removed from the list of piracy-prone countries.

“Nigeria was just delisted from the piracy prone countries because of the collaborations with navies like you,” he said.

He said that the navy would continue to work hard to ensure a reduction, and possibly eliminate piracy and sea robbery completely.

He said that a lot of the African countries have also been working hard and synergising just to make sure they fight against piracy.