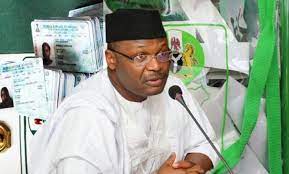 The Independent National Electoral Commission, INEC, has said that the PVC remains a mandatory requirement for voting during elections.

Chairman of the Commission, Mahmood Yakubu, while addressing a retreat for new Resident Electoral Commissioners, REC, in Lagos Wednesday dismissed the misleading statement shared online that voters can vote on Election Day without the voter’s card.

“This is absolutely incorrect”, declared Yakubu.

The Chairman said, “For any person to vote in any election organised by the Commission, he/she must be a registered voter issued with a PVC.

“The Commission has consistently maintained the policy of “no PVC, no voting”. Nothing has changed. It is a legal requirement and doing otherwise will be a violation of the law.

“I appeal to Nigerians to ignore any suggestion to the contrary. For the avoidance of doubt, Section 47(1) of the Electoral Act 2022 provides that “a person intending to vote in an election shall present himself with his voter’s card to a Presiding Officer for accreditation at the Polling Unit in the constituency in which his name is registered”.

He also spoke on incessant attack on its facilities and the destruction of critical electoral assets across the country.

He reassured Nigerians that the Commission will recover from these attacks, adding, “The lost materials will be replaced but there is a limit to our ability to keep replacing wantonly destroyed materials with just 86 days to the General Election. The security agencies, traditional and community leaders and all well-meaning Nigerians should continue support the Commission to stop the attacks but the ultimate solution is arrest and prosecution so that vandals and arsonists do not feel that bad behaviour is an acceptable conduct in our country.”

He commended the United Nations Development Programme (UNDP) for supporting this retreat saying that its long-standing partnership with the Commission has gone a long way in sustaining the incremental progress we are all witnessing in our electoral process.