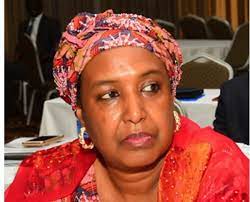 According to her, despite many national and international Conventions, Resolutions and Agreements to improve women’s lives, of which Nigeria is a signatory, women have remained backwards and neglected across the country.

Dr Maikudi, who made the call in her opening remark delivered at a one-day sensitization and enlightenment meeting with female contestants in Kaduna State on 4th August, also regretted that women were not being given what they truly deserve in various organizations.

“We are not given the right positions in organizations politically and socially,” she observed. “Women’s participation in formal political structures and processes, where decisions regarding the use of societal resources generated by both men and women are made, remains insignificant, as we have just seen in the National Assembly’s rejection of Affirmative Action in the Constitutional amendment of the Electoral Act.

“The rejection of the five gender equality bills among 68 amendment bills presented for voting in the constitutional review by the National Assembly is most unfortunate. Among the five gender bills rejected by the parliament were the affirmative action bill to ensure 35 per cent positions for women; the bill on ministerial or commissioner nomination; and the Reserved Seat Bill to create additional seats for women at the Senate, House of Representatives, and the State Houses of Assembly. This is most unfortunate.”

According to the REC, women constitute slightly more than half of the world population, while their contributions to the socio-economic development of societies are also more than half when compared to men because of their triple roles in the productive, reproductive and community management spheres.

She declared: “Any nation that does not recognize its women and their capacity is doomed to failure,” adding, “I must acknowledge some countries that have found women worthy of leadership, and I commend such women for proving their worth. Rwanda readily comes to mind here. It is a strong example of how women can be utilized and assessed.”

Dr Maikudi praised the 35 female politicians in Kaduna State who emerged victorious in their party primaries, just as she urged them and other stakeholders from all political parties in the State to dispense their duties with honesty and integrity.

She reminded women that they need men’s support to achieve their full potential and bring in their expertise to move the country forward, hence the need to get Men’s buy-in. She further urged women to support each other as they constitute over 50 per cent of the registered voters in the recently concluded Continuous Voter Registration (CVR), which she said could earn them success in the 2023 general election.

Dr Maikudi appealed to policymakers to stop the continued marginalization of women in Nigeria, describing the practice as a huge detriment to the country’s effort to grow as a stable, democratic nation.

She said: “Any democratization process that fails to incorporate a gender perspective is a flaw. Any sensitive democratization must create and ensure equity to women in politics and all factors of development in the nation.”

She also applauded all women leaders from various groups for the progress and emancipation of women in different spheres, urging them to serve with dedication and credibility in their various leadership position.