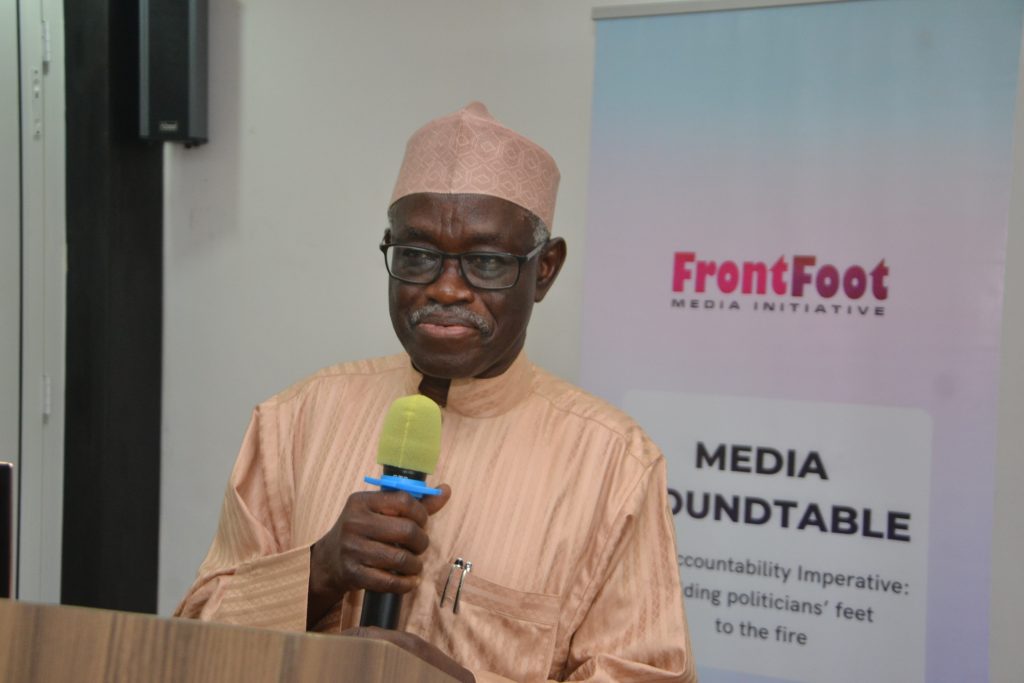 The Independent National Electoral Commission, INEC, Resident Electoral Commissioner, REC, Mallam Mohammed Haruna has called on the Nigerian media to extend its focus on accountability beyond politicians and hold responsible every person or group whose decisions and actions affect society. Speaking at the Media Roundtable on “The Accountability Imperative: Why and How to Hold the Politicians’ Feet to Fire” organised by FrontFoot Media Initiative, Lagos, at Bon Hotel, Ikeja GRA, on 19 November 2022, Mr Haruna said various other persons beyond politicians decide issues for society.

The INEC Commissioner stated, “Big Business, Big Labour, Big Pharma, and, of course, B ig Media, etc., all make decisions that affect people. Therefore, we must go beyond the Constitutional enunciations for the Media to hold the Government accountable to the public and hold every institution whose decisions and actions impact people and society to account for their decisions and actions”.

The FrontFoot Media Roundtable featured many distinguished personalities in the media and politics including a former two-term governor of Cross River State, Mr Donald Duke, Dr Patrick Dele Cole, Mr Lade Bonuola, a former editor and Managing Director of The Guardian, Mr Dan Agbese, one of the founders of Newswatch magazine, and Mrs Motunrayo Alaka, Executive Director of the Wole Soyinka Centre for Investigative Journalism.

Haruna is a Fellow of the Newspaper Proprietors Association of Nigeria, the Nigerian Guild of Editors, and the African Center for Democratic Governance.

A former managing director of the New Nigerian newspaper and renowned columnist, Haruna charged journalists to equip themselves with knowledge of three critical rules for reporting political developments in the country.

Mallam Haruna submitted: “As the leader in holding not just politicians but all other groups accountable to the people, the Media must be guided by knowledge, ethics (integrity, courage, professionalism, impartiality, etc.) and civility. The first step the Media must take in holding politicians accountable to the public is to be knowledgeable about politics and everything else it reports. This should start with knowing the rules that guide our politics.”

He listed the three rules that “constitute the most critical elements of the country’s Electoral Legal Framework” as the 1999 Nigerian Constitution, the Electoral Act 2022, and the Independent National Electoral Commission’s (INEC’s) Election Regulations and Guidelines 2022.

In his paper, “It’s good governance, stupid”, Mallam Haruna disagreed with the widespread view that the constitution is flawed because the Military wrote it and that it is only federal in name but unitary in reality.

He submitted: “Both claims are false. The Military has never written any of our Constitutions, certainly neither the current 1999 Constitution nor that of 1979.

Both were written by civilians, mostly elected, with a few nominated.

Both drafts were subjected to public hearings in all the nooks and corners of this country before they were promulgated into law. Yes, the Military held a veto over both, but in promulgating each into the country’s supreme law, they hardly changed their substance.

“As for the claim that the Constitution is unitary in fact, if not in theory, nothing could be further from the truth. This claim has led to the popular fallacy that what Nigeria needs is “true federalism”. A federation is simply a system of Government in which a written constitution distributes power and responsibility between a national government and a number of state or regional governments. No two federations distribute power and responsibility the same way and, because the historical context of each country is different, the distribution that is appropriate for one country may not be appropriate for another.”

Participants are from the Newspaper Proprietors Association of Nigeria, the Nigerian Guild of Editors, and the Guild of Corporate Online Publishers.

The breakfast meeting follows the workshops on Audit Reporting that FrontFoot Media Initiative held in October 2022 in Benin City and Awka. The workshops drew professionals from two states, each in the South-South and the South-East.

FrontFoot Media Initiative is a non-profit, civil society organisation established to advance democracy and development by enhancing journalism quality in Nigeria and the African continent.

FrontFoot will undertake projects to strengthen the mass media as a critical element in democracy. These will include various training and retraining programmes, a professional institute, and publishing.