INEC Rejects Powers Of AGF To Make Rules For The Commission 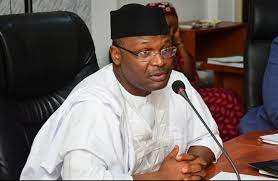 The Independent National Electoral Commission, INEC, has asked the National Assembly to erase powers conferred on the Attorney-General of the Federation to make rules for the Commission.

Chairman of the Commission, Mahmood Yakubu, in his remarks at a public hearing organised by the House of Representatives Committee on Electoral Matters on Tuesday August 23, 2022, in Abuja, challenged Clause 44 which empowers the Attorney-General of the Federation to make rules or regulations for the Commission. According to him, Conferring additional power to any other body may cause friction or conflict with the Commission which should be independent in the discharge of its functions even if doing so requires consequential amendment to other laws of the Federation to empower the Commission and guarantee its independence.

“In any case, Clause 1(2)[c] of the Bill grants the Commission power to make its own rules and regulations.

“Thirdly, because work on the Bill started before the passage of the current Electoral Act into law, all references to the Electoral Act 2010 (as amended), for example Clause 39(1), should be replaced with relevant provisions of Electoral Act 2022.” Yakubu said.

He informed the Committee that INEC is basically an electoral Commission with extensive responsibilities which include the registration and regulation of political parties, the monitoring of party and campaign finance, their primaries, congresses, meetings and conventions; nationwide Continuous Voter registration (CVR) and the maintenance of the national register of voters; creation of polling units; delimitation of electoral constituencies; voter education and publicity; management of electoral logistics; recruitment, training and deployment of election duty officials.

The Chairman listed other responsibilities to include the conduct of numerous off-cycle and bye-elections; new innovations to promote inclusivity and electoral integrity; election security in consultation with the security agencies; strategic engagement with stakeholders; formulation of regulations, guidelines and manuals for the conduct of elections and electoral activities to give clarity to the provisions of the Constitution and Electoral Act; and maintenance of extensive physical assets (offices, residential accommodation and other facilities) nationwide. In many jurisdictions, some of these responsibilities are carried out by distinct and autonomous agencies.

Continuing he said, “For those who argue that the solution does not lie in expanding the federal bureaucracy by creating a new Commission, we believe that the National Electoral Offences Commission should be seen as an exception. While there are other security agencies that deal with economic and financial crimes, I am yet to hear anyone who, in good conscience, thinks that it is unnecessary to have established the anti-corruption agencies.”