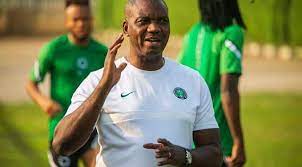 The interim boss of Super Eagles, Augustine Eguavoen, has expressed satisfaction with the players’ response while in camp and during the team’s training session, in Abuja.

While speaking after the team’s first training session, on Tuesday, in Abuja, in readiness for Friday’s Qatar 2022 FIFA World Cup play-off against the Black Stars of Ghana, Eguaveon, assured that the team was ready to do the nation proud by recording a win in Kumasi, Ghana

The team’s boss, said the injury concerns in the squad had been adequately taken care of, adding that the squad’s goalie, Maduka Okoye, who fell sick, might still join the team, while Innocent Bonke has replaced Wilfred Ndidi, who got injured while playing for Leicester City.

Eguavoen, explained that the invited players were in good football form and their level of confidence towards the matches against the Black Stars of Ghana was very high, stressing that the squad would train twice today before the match on Friday, twenty-fourth March