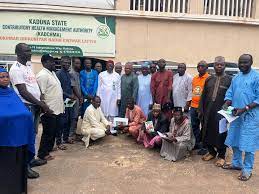 KADCHMA Head of Administration and Finance, Mr Suleiman Mustapha, announced this in Kaduna, at a one-day Roundtable Dialogue on maternal and child health.

The News Agency of Nigeria (NAN) reports that the dialogue was organised by the Maternal and Child Health-Civil Society (MCH-CS) Partnership with support from Save the Children International.

Mustapha explained that 79,329 poor and vulnerable populations were enroled for free basic health under the one per cent consolidated revenue of the state government.

He added that the state government had so far released N1.1 billion to cover the basic health care services of the poor and vulnerable.

He also said an additional 50,648 poor and vulnerable population were enroled under the Basic Health Care Provision Fund, adding that a total of N1.1 billion had also been contributed to cover their healthcare.

Mustapha said 6,530 residents had been enroled under the informal sector with their contribution amounting to N69.5 million.

The Executive Secretary of the Authority, Mr Abubakar Hassan, explained that KADCHMA was established in February 2018 and commenced provision of health services in June 2020.

According to him, the health scheme is part of the state’s human capital development and social protection strategy for all residents.

“The scheme aims to reduce out of pocket spending on healthcare to the barest minimum, thereby reducing poverty arising from catastrophic and impoverishing health spending.

“The contributory health scheme is a social security system for all residents, carefully designed such that the rich, the healthy and the young subsidised the healthcare of the poor, the sick and the old.

“This is consistent with traditional African solidarity and in line with the overarching global agenda of attaining Universal Health Coverage.”

Hassan commended MCH-CS for organising the event, stressing that continued partnership with civil society organisations would strengthen transparency and accountability in service delivery in the health sector.

Earlier, Mrs Dorcas Adeyemi, Chairperson, Maternal and Child Health-Civil Society Partnership (MCH-CS) said that the objective of the dialogue was to share updates on key mandates and programmes of selected health agencies.

Adeyemi added that the meeting was to share understanding on the critical roles of civil society in promoting quality Maternal Newborn and Child Health (MNCH) services and accountability in the state.

“This will help us share areas of collaboration in relation to MNCH advocacy and accountability in Kaduna State,” she said.

Also, Mr Benjamin Maigari, a member of the MCH-CS, said that the group was established in 2008 with 10 pioneer civil society groups as members, working with media to address maternal and health issues.

Maigari said that MCH-CS was the first to advocate for the establishment of the contributory health scheme, saying “I am happy to see that KADCHMA is not only established but waxing stronger”. (NAN)