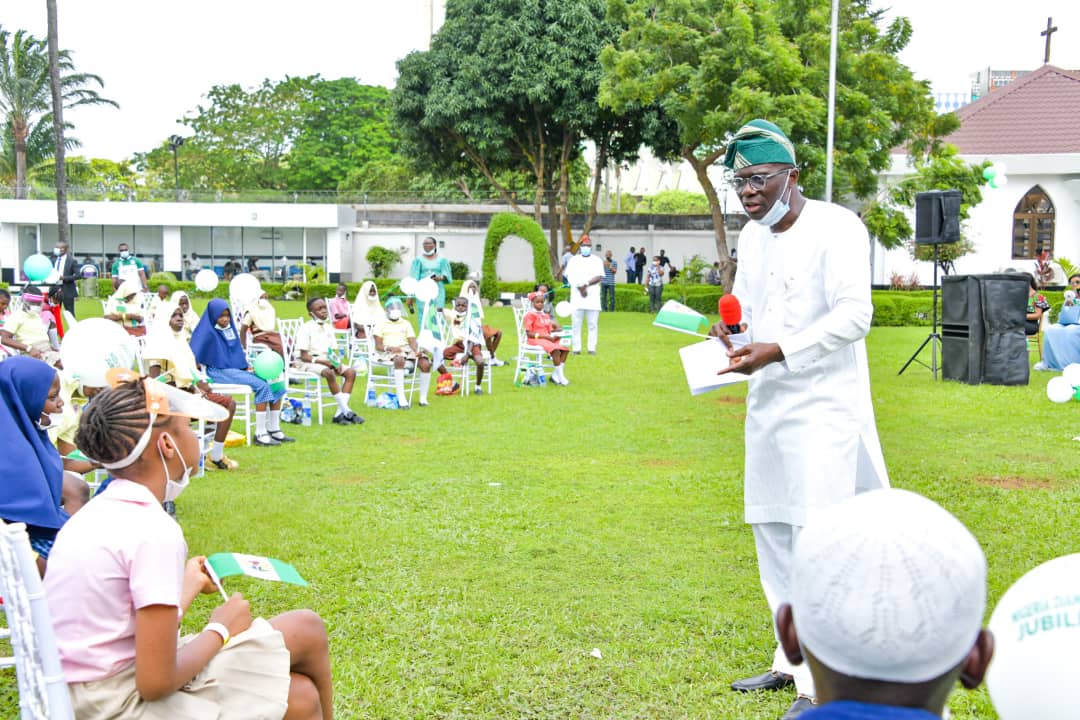 Alternatively, the Governor created a simple, but memorable commemorative event for selected school children to give them the understanding of the significance of the anniversary.

Sanwo-Olu, who was joined by his deputy, Dr. Obafemi Hamzat, hosted 60 primary school pupils drawn from various localities across Lagos for a no-holds-barred conversation about the Independence Day.

The event was held at the State House in Marina – a short distance from the Tafawa Balewa Square (TBS), where the instrument of independence was handed over to Nigeria’s founding fathers on October 1, 1960.

The event tagged: “Nigeria’s Future Diamonds”, was organised with an objective to inspire patriotism among children and to give them orientation on civic duties required towards building the nation of their dreams.

The pupils listened with rapt attention, as Sanwo-Olu delved into the history, taking them on an elaborate lecture on the nation’s pre-independence struggles and the roles played by each of the Nigeria’s founding fathers who fought for country’s freedom from colonialists.

The Governor told them that each stanza of the national anthem was a reminder to every citizen to sustain the vision of a united and prosperous Nigeria, stressing that the collective labour of the nation’s past heroes would be in vain if future leaders failed to uphold the values.

He said: “Today makes it 60 years when our country, Nigeria, became independent from colonial rule. The freedom we are enjoying today did not come by accident; it was made possible by the collective efforts and labour of the likes of the late Chief Obafemi Awolowo, the late Dr. Nnamdi Azikiwe, Sir Ahmadu Bello of blessed memory, and Chief Anthony Enahoro, among many others. They were the ones who negotiated with the British and liberated us from colonial rule in 1960.

“Every time we sing the national anthem and recite the national pledge, we are reminded of the labour of these heroes, and our collective duty, as citizens, to keep alive the vision of a united and prosperous Nigeria. As young citizens, it is our duty as today’s leaders to protect your future. We understand there are challenges, but the effort of building the nation is on course. We will do our best to create a country in which you will be proud of being citizens.”

Sanwo-Olu observed that the nation had experienced high and low moments in its march to attain desired development, but said the current challenges would be surmounted if the citizens eschewed divisive tendencies and work in common purpose.

The Governor charged the children not to give up on the country, noting that there had been positive development recorded in the last six decades, which indicated that Nigeria of everyone’s dream remained achievable.

He urged the children to be patriotic and imbibe values that would promote the unity of the country. Sanwo-Olu also advised them to start reading books that will educate them better on nation building and civic duties.

He said: “As you grow older, you will need to read books and there are authors, such as Prof. Wole Soyinka, Chinua Achebe, Peter Enahoro and Chimamanda Adiche. These books will educate you more on what it takes to build a nation and what roles you will need to play when you become leaders. You must never give up on the country, no matter how imperfect it might look.

“We need you to begin to imbibe the Lagos Spirit, which is all about excellence, resilience, commitment to service and tolerance. You are the future leaders and you must start acting as leaders. The only way we can all build our dream country is to believe in Nigeria. This is why we brought you together; to make you understand you have roles in delivering a country that will reflect the dreams of all of us.”

The First Lady, Dr. Ibijoke Sanwo-Olu, said the yearly commemoration of the nation’s Independence anniversary underscored the need to bring back history subject to the basic schools’ curriculum.

The subject, she said, would give children understanding of the significance of the event.

The pupils also had personal interaction with the Governor, during which they asked questions about education and healthcare. The session also afforded the children an opportunity to share their future ambitions with the Governor.

Samuel Olasunkanmi, 7, of Amosun Primary School in Agege, said his future ambition was to work as law enforcement agent to achieve his dream of bequeathing responsible Police Force to the country.

Also, Okikiola Akinrinmola, 9, of the State Primary School in Sango-Agege, said she would like to become a teacher in the future to raise the quality of education in the country.