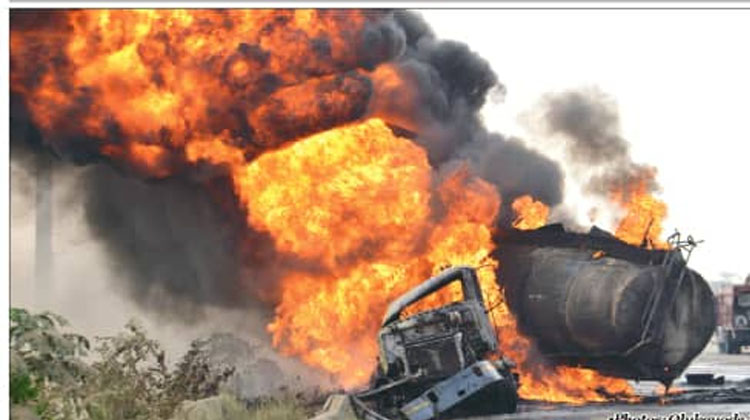 Ibrahim Farinloye, the Coordinator of the Lagos Territorial Office of NEMA, in a statement said, “At about 0020 the NEMA received distress alert on a tanker fully loaded with about 45,000 litres of PMS exploded immediately after crashing at Banire/Ejigbadero Busstop, Egbeda, Lagos State.”

The tankers was said to have loaded at Abule Ado.

Farinloye, said though no life was lost or property destroyed but the tanker with  no registration number is still half filled with PMS and crossed the major highway.

The  Police Disaster Management Unit and Gowon Estate Police Station have apprehended the driver of the truck, while efforts is on to decan and transload the content to another tanker before the road can be opened for traffic

Agencies on at the scene are NEMA, LASEMA Response Unit, Police DMU and the Gowon Estate Division

COAS Death A Blow To Fight Against Terrorism- Buhari