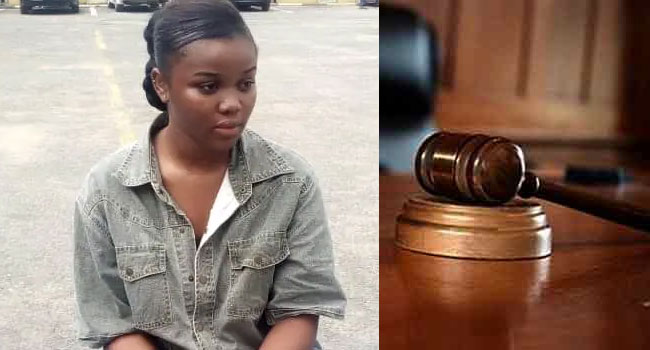 They are being accused for the murder of the Chief Executive Officer of Super TV, Usifo Ataga.

Chidinma was charged on Monday, September 6, 2021; before a Chief Magistrate court sitting in the Yaba area of Lagos; over the alleged murder of Ataga.

Counsel to the Police Cyril Ajiofor told Magistrate Adeola Adedayo that the Police had received legal advice from the office of the Directorate of Public Prosecution (DPP) on the case.

The DPP revealed that after careful consideration of facts available in the case file; a prima facie case of conspiracy to murder; as well as conspiracy to commit felony exists against the 300 level Mass Communication student of the University of Lagos, Chidinma and Quadri.

A prima facie case of stealing exists against Chidinma alone.

The DPP also established the offence of having possession of a stolen item against Chidinma’ssister, Egbuchu Chioma; from whom the deceased’s iPhone 7, was said to have been recovered.

As a result, the Director of Public Prosecution, Mrs Olayinka Adeyemi, has filed charges against the three suspects at the Lagos High Court for the murder of Ataga, but has yet to get a date for the hearing of the case.

The DPP will prosecute Chidinma and Quadri “for the offences of conspiring to murder; murder; conspiracy to commit felony to wit: forgery; forgery; and making documents without authority contracts to Sections 233, 222, 411, 363, and 370 respectively of the Criminal Law, Cap. C17 Vo.3 Laws of Lagos State, 2015.”

Also, the DPP will prosecute Chindinma’s sister Chioma “for the offence of having possession of thing (sic) reasonably suspected to have been stolen contrary to Section 329 of Criminal Law, Cap. C17 Vol.3 Laos of Lagos State, 2015”.

JAMB Hands Over 19 Year Old Who Sued Agency To Police