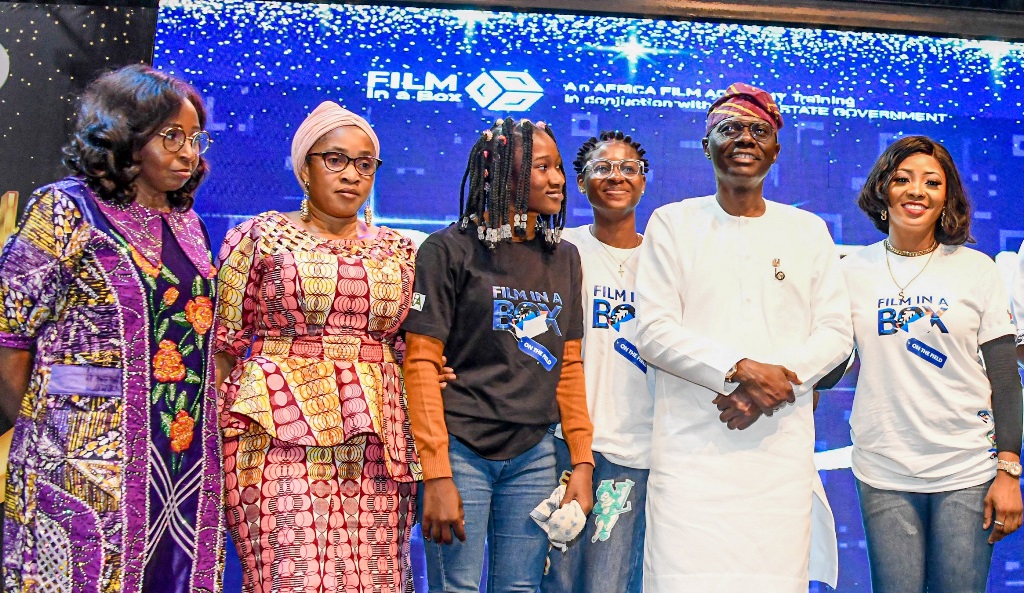 In line with Governor Babajide Sanwo-Olu administration’s commitment to Entertainment and tourism, 890 youths sponsored by the Lagos State Government have graduated from the African Film Academy after a six-week free intensive training.

The 890 youths were beneficiaries of the ‘Film in a Box’ programme by the African Film Academy in conjunction with the Lagos State Government, to train and empower young people in the creative industry in three different centres – Alimosho, Epe and Badagry respectively.

The graduating trainees were trained in Acting, Art Directing, Light and Lighting, Editing, Sound Production and Post Production, among others.

The beneficiaries of the Film in a Box initiative, who were visibly excited by the gesture from the Lagos State Government praised the government’s commitment to the creative industry and promised to support and ensure Governor Babajide Sanwo-Olu’s victory for a second term in the next year governorship election in Lagos State.

Speaking at the Film in a Box Graduation Ceremony of the African Film Academy, held at the Lagos Theatre, Igando in Alimosho, Governor Sanwo-Olu restated his administration’s commitment to collaborate with stakeholders in the entertainment industry to train and acquire skills that would create an ecosystem to give livelihood to creative minds.

Sanwo-Olu, who assured that his administration’s THEMES agenda is to make life a lot easier and beneficial to all Lagos residents, especially the youths, said Lagos State Government is committed to achieving its 30years (2022 to 2052) development plan, which was unveiled recently at the 2022 Ehingbeti Summit, as well as building an African Film City in Epe axis of the State.

He said his government would ensure it uses entertainment and tourism to connect with the future so that Lagos can be a one-stop shop in the world and therefore urged those in the creative industry to harness the opportunities provided on the right track to ensure a better and greater Lagos as well as taking the State and Nigeria to an enviable position.

Sanwo-Olu also urged those who graduated from the African Film Academy and other creative initiatives by the State government to take advantage of the Lagos States Employment Trust Fund and the State Film Fund, to become self-employed and employers of labour.

Speaking earlier, Lagos State Commissioner for Tourism, Arts and Culture, Pharm. (Mrs) Uzamat Akinbile-Yusuf, said the initiative was to make the youths agents of change in the creative industry and break new grounds to enable them to become self-reliant.

She said the concept had been expanded to develop the arts and culture for optimum performance to stimulate economic growth, skills and job creation to bridge the gap in the state creative industry.

Akinbile-Yusuf while congratulating the graduates, assured them that Lagos State Government would continue to monitor their growth and assist them in producing competent creative works in the industry.

In her remarks, a renowned filmmaker and Chief Executive Officer of African Film Academy, Mrs. Peace Anyiam-Osigwe, who commended the doggedness of her students, urged them to explore the creative industry with training received in the academy.

She said though the mandate was to train 600 people, 890 students were trained by the Academy in Epe, Alimosho and Badagry, noting that some of those trained in the Academy had gotten jobs already as they were also taught the business side with the creative side.

The CEO of African Film Academy disclosed that some of the students during the period of their training made films, adding that one of the films they made “Akanji” would be shown in the cinema portraying Alimosho to the world.

Anyiam-Osaigwe, who commended the Babajide Sanwo-Olu administration for huge investment in the entertainment and creative industries, praised the Lagos State Government for equipping the Badagry General Hospital to respond to emergencies, especially when a facilitator fell ill.

A filmmaker and veteran in the creative industry, Mr. Tunde Kelani, one of the facilitators, thanked the Lagos State government for investing in the entertainment industry which he noted would curb youth restiveness in Lagos and make young people to be entrepreneurs.

Kelani also commended Governor Sanwo-Olu on the proposed film city in Lagos, saying the name of the governor would not be forgotten.

He also urged the graduands to imbibe teamwork, read, and not to forget their mentors.