Lagos To Deploy Passenger And Cargo Airport At Lekki 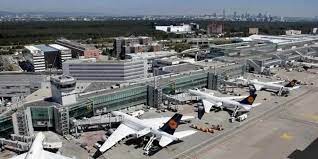 The federal approval recently granted the Lagos State Government to embark on the development of a passenger and cargo airport on the Lekki-Epe axis of the State has been officially presented.

Lagos Government initiated the aviation project, through a Public Private Partnership (PPP), in response to the pace of development on Lekki-Epe axis, which is now a fast-growing hub of commerce and industrial activities. The entire airport infrastructure will be sited on 3,500 hectares, with the first phase of the project estimated to cost $900 million.

Some private consortia have already expressed their interests in developing the airport, but Lagos Government is yet to decide on which investors to partner on aviation infrastructure.

Sanwo-Olu described the approval as another “successful step forward” towards delivering his administration’s agenda of Greater Lagos and keeping the State on the path of irreversible economic prosperity.

The Governor said the development was a triumph for the vision of the All Progressives Congress (APC) presidential candidate, Asiwaju Bola Ahmed Tinubu, who initiated the Lagos Economic Summit where the idea of the airport started.

He said: “Granting the licence for the airport project is a right step in the right direction. For us, it is all about partnership for the greater good of our State. The real beneficiaries are the citizens and the businesses that will be using the infrastructure to activate more economic prosperity. We are bringing the Government to tap business opportunities, while also providing platforms for businesses to flourish. That is how great economies are developed.

“The foundation of growth is building requisite infrastructure and creating platforms for businesses to thrive. This aviation infrastructure will reduce journey time and make commercial hubs in Lagos easily accessible. It would help investors to make best local and international business decisions, given all the investments that have been brought to the Lekki Free Trade Zone.”

Sirika said the federal mandate to Lagos Government on the airport project enjoyed accelerated approval, because of the growing need to further link Lagos and Southwest to international markets and regional trade.

The project, the Aviation minister said, would transform the GDP of Lagos and create jobs for the national economy. He said the airport would complement the existing Murtala Muhammed International Airport whose operation is overstretched.

“There has been an expansion in Lagos, from Eko Atlantic City to Lekki Free Trade Zones. This growth necessitated the need for another airport in Lagos. We will deploy our statutory agencies to ensure the project is done in compliance with international standards,” Sirika said.

Declaring the two-day summit open, Sanwo-Olu said Lagos had begun its race to building a prosperous future with the introduction of a 30-year growth plan that would bring the State on the same pedestal with developed cities in 2052.

He said the Government’s pathways to the future were planned based on the projection of creating and implementing localised solutions within the context of unique socio-economic realities facing the State.

Sanwo-Olu said the State would have an allowance to look outside for inspiration, but stressed that all suggested ideas must be considered on the foundation of deep local context and adaptation.

He said: “Over the next two days, we will listen to policy-makers, thought-leaders, futurists, disruptors, innovators, investors, and economists among others; all united by an abiding focus on the development trajectory of Lagos.

“They will share insights and offer perspectives on Lagos’ pathways to the future, most especially the solutions that can be readily implemented within the context of our unique circumstances. Indeed, the emphasis on ‘home-grown’ and localised solutions is very important.”

Egube said the State Government had implemented 210 of the 222 resolutions reached in the past eight editions of the economic summit, adding that the engagement with the private sector had helped improve accountability in governance.

The summit chairperson and Partner, PwC Nigeria, Mrs. Mary Iwelumo, said the ongoing event, which is the 9th edition in the series, recorded historic participation of 30,000 participants within the country and overseas.

The summit attendees include members of the State Executive Council, current and past elected public office holders in Lagos, captains of industry, business leaders, diplomats, entrepreneurs and investors.