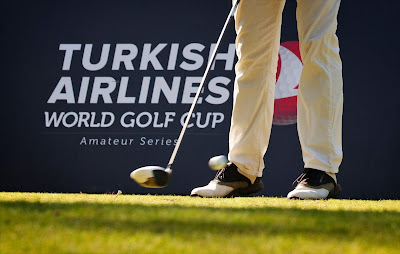 With a fleet of 333 aircrafts flying to more than 306 destinations in 124 countries around the world, Turkish Airlines, who carried over 75 million passengers in 2018, a record for the Star Alliance member airline, will be hosting the largest golf tournament in Lagos on September 5, 2019. The Turkish Airlines World Golf Cup, which is also the world’s largest corporate golf tournament, will be played in Lagos for the fourth time.

In addition to their newly-opened Istanbul Airport hub that is set to serve up to 200 million passengers annually, Turkish Airlines through this tournament, demonstrates that business and golf are a natural fit and no-one combines the two as well as they do with events like this and their backing of the European Tour tournament, Turkish Airlines Open, and the Challenge Tour’s Turkish Airlines Challenge.

The Golf Tournament is proof that the world’s finest airline also serves up the very best for its clients on the fairways as well as the runways – all with the genuine Turkish hospitality famous around the world. Golf is entrenched in the Turkish Airlines philosophy that customers’ clubs can even fly for free. Players can look forward to another unforgettable Turkish Airlines World Golf Cup, which is now in its seventh year and is sponsored by National Car Rental & SOCAR.

Yunus Ozbek, General Manager of Turkish Airlines Lagos said: “We are thrilled to be back in Lagos with the TAWGC and a new group of golfers as our event has become a highlight on the region’s calendar over the past four years. We are proud that this competition has grown in parallel with the world class Turkish Airlines brand. Good luck to the players, we look forward to inviting the winner to represent Lagos in the Grand Finals in Turkey later this year.”

“Flying to more countries than any other airline in the world, Turkish Airlines supports some of the world’s most successful sportspeople and organisations bridging cultures and continents. Alongside TAWGC, Turkish Airlines is title sponsor of Turkish Airlines Euroleague, Europe’s top club level basketball competition and is committed to supporting the best sporting competitions around the world”, Yunus Ozbek added.

The 2018 Turkish Airlines World Golf Cup broke records yet again with 100 qualifying events that took place around the world, including past Open Championship venue Royal Birkdale and Ryder Cup destinations Gleneagles and the K Club in Dublin. Winners reached the Grand Finals in Turkey and the champions in the Finals secured places in the Turkish Airlines Open Pro-Am, where previous winners have played alongside Tiger Woods and Rory McIlroy.